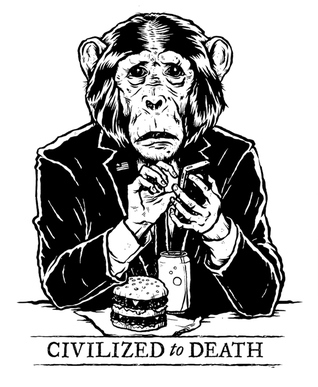 Rarely have I read such a frustrating book. Civilized to Death is trying to show that our modern life and societal order is not the only solution, that progress doesn't mean what we think it means and that a lot of the things we take for granted about our (pre)history and path as a species is just propaganda. So on one side, I was fascinated by the concepts shown in the books. However the tone of the text is so shrill, inconsistent and self contradicting that I found it infuriating.

Christopher Ryan is obsessed with hunter gatherer societies. He rose to fame with a book that covered the sexual behavior of our closest relatives: chimps and bonobos, as well as the information he had collected on our ancestors in prehistory about the subject. Again, he was trying to show that most of what we know or take for granted about human sexuality is self interested bullshit, beginning with the arrival of agriculture. In Civilized to Death he just moves even further to blame all the ailments of humanity on that same event and the hierarchical paternalistic profit obsessed society that arose since then. Progress, he argues, can only be measured in human happiness and well being and modern society sucks at that.

You can skip reading the book and just read the cheat-sheet that the author published on his web site for it. The basic gist is that we were better off hunting and gathering and that modern society is just a self-sustaining meme that leads to our domestication for its own survival, not something that increases our happiness. It's a zoo for ourselves and we should take control over what that zoo looks like and how it treats us.

I agree with that last statement, but I call bullshit on Ryan's arguments. He vilifies Malthus, but then he claims if we limited our population to 100 million, we would all have enough resources to live without effort. He attacks statistics and experiments as being biased or even intentionally skewed, then he uses statistics and experiments of his own that he likes better. He attacks globalization and how it forced the same narrative on everyone, but then he makes his research and his money with the help of the global communication network that technology provided.

His worst sin, though, is how we so liberally uses the terms "we" or "humanity" to define the specific group of people that he likes. For example, people are slaves to the drive to work. If they try not to work, the entire society brings hell down on them, so they are forced into this horrific labor camp that the Earth has become. He completely ignores the people that absolutely love to work! Ryan mentions people who could very easily stop working and live a comfortable life, but they don't, only he puts this all on some perceived addiction to work, not that it gives people meaning and fulfilment if doing the thing they love. He talks about how egalitarian hunter-gatherer societies are, but he completely ignores what happens to the members of those groups who do not want to be egalitarian. And so on. He is furious against what he calls the Narrative of Perpetual Progress, which he then dismissively calls NPP in the rest of the book, but he doesn't really come with an alternative.

And that makes the book very frustrating, because you want to believe what he says, you want to look further into the sources he mentions, but the way he puts everything together feels like very artificial cherry picking. And the ending is always something like "OK, I may have gone too far, but what I really mean is...". No! Just don't go too far. Make me trust what you are saying, not feel I am being swindled by a TED talking Marx!

Bottom line: a very interesting premise, but poor argumentation. Still worth a read.