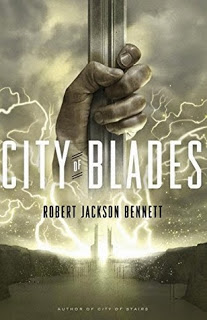 It takes the third book to see that the "hero's journey" is actually Sigrud's, even if he is the lead character only in this final book of the Divine Cities series. And yes, it is the final book, with a satisfying and very permanent ending, with no hope of dragging it on. Hell, if you consider there are three books and two cities and no gods left, you could wonder how would anyone continue the story if pressured by publishing companies.

Robert Jackson Bennett did not disappoint with City of Miracles, switching registers a little by turning the usual steampunk-noir detective story into more of a chase and revenge thriller. The villain is revealed quite soon, the mystery split into multiple little quirks that nag at you until the end of the book and a massive divine battle to top it all up. Yet I was a little disappointed with the ending. I know, rationally, that it is a great ending, but emotionally I didn't get what I needed from it, especially as I was still fired up on the penultimate chapter only to get an "aftermath" chapter for last.

Maybe it was that one of the options they employed at the end could have easily been the first and solved a lot of problems to boot. Or the fact that a lot of the grief in the final third of the book came from Sigrud not checking his kills, which is something he would never ever do. It felt a little stretched and tired compared to the other stories.

Sometimes I wonder, is it easier or harder for a writer to just abandon a world that he so carefully crafted? Is it a burden that everything that is successful needs to be turned into a trilogy or a series, or is it like coming home, writing about good friends living in your head? Either way, I am kind of grateful to Bennett for ending it all. I would have read more and more books like these if he wrote them, because I am an addict at heart, but I believe both of us can do better.

Bottom line: It's kind of difficult to compare the three books in the series. The first one was the most captivating, but also first, the second one was darker, yet in the same vein, while the last felt philosophical and like the writer wanted to get it done with. You can read either as standalone, although it makes more sense to read the whole trilogy from first to last. I recommend it and I will read more from the author.