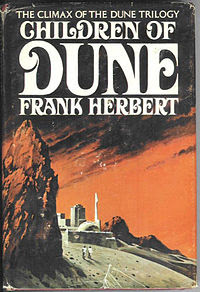 The third book in the Dune saga is a strange mix between the first two. It has the epicness of the first, the setting up of the next book like the second and a length that is between the lengths of the previous books. It becomes obvious that Herbert has become too connected to his own characters and he is sometimes talking, so to speak, to himself. Characters say obscure lines that somehow strike a strong emotional or intellectual cord in their interlocutors, giving the impression they are very smart and perceptive, but that's all it is: an impression. There is a strong mix (not to say melange) of behaviors in single characters or of interactions between them that makes no sense at closer examination. If there is a word that would most fit with Children of Dune, it would be "pompous". The characters are wallowing in their hidden powers and arrogantly spewing big words that ultimately mean nothing.

That doesn't mean I didn't enjoy the book. I remember when I was younger I was debating if this or the next, not the first, were the best books. Now I believe that it was somehow a rushed release. A little more effort, maybe even with a splitting of the book in two smaller ones with more substance, would have made this a contender for the title. As such, though, it only mirrors the shine and edge of the first Dune book, while being less powerful. How much time did the idea of Dune mature in Herbert's head before he put it on paper and how much time did he have for Children of Dune, under the pressure of fans and publishers?

If something really hurt the consistency of the story it was the larger than life characters introduced at first: the Bene Gesserit legacy of memory and terrible training, the prescient, the Tleilaxu, the indomitable Fremen. Hard to keep the pace with such monsters. What mistakes could one do having the entirety of their ancestors' memory at their disposal? What effect would knowing the future or taking any shape you desire have on you? What would happen to fierce desert warriors when presented with a life in comfort? These are the questions that the book tried to ask, while it couldn't keep up with the immensity of the described universe and characters. Hard to describe specific bits without spoiling the story, but a good example is The Preacher, or the childish fits of anger on people that were supposed to be weathered by hardship, training and past lives.

Now, Frank Herbert is no fool. He not only noticed that the book he wrote is a little too arrogant, he has a plan. The next book will take that arrogance and throw it in our faces like a sin of all humanity that must be punished. I remember the God Emperor of Dune as a fantastic book and I can hardly wait to read it. But I also thought Children of Dune was bigger than life and now I have changed my opinion. We'll see.

I thought the plot of the book was too convenient, with people who have no connection to one another suddenly making plans that consider all of the others. Also, a great inconsistency between the declared training and ability of some people and their behavior. But maybe that was the point: they are all superhuman, but they are still human. They have extraordinary skill, but also make mistakes. In their greatest moments of despair or triumph, they falter. I don't know.

I am certain that in this book I hated the Fremen, all arrogant and rigid, with their laws and their world view that never changes, all the time heralded as some great examples of humanity. They were psychos! The entire empire was a cesspool of ignorant religious fanatics. While in my youth I considered that annoying, now I found it creepy, maybe right down terrifying, because I can see it happening around me so easily. I do remember that I expected a better end for Alia and that was my impression now, as well. They had prescience, the knowledge of all past generations and a clear solution to the problem, but they just decided it was too late or too complicated to do anything.

This time I got more of the pompous utterances in the book. It didn't seem so empty of meaning anymore. Yet it still is pretty dense and pretentious, with many thing left just unexplained, just happening for the sake of the plot.

I am looking forward to rereading God Emperor of Dune.