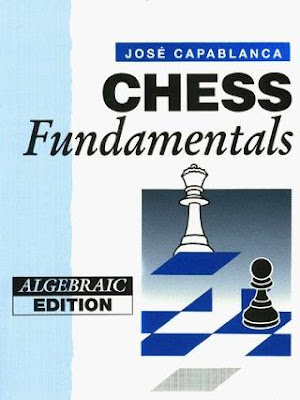 Any person that is remotely interested in the history of chess knows the name of José Raúl Capablanca. He was a great chess player and the world champion for 7 years in a row. I've just finished reading one of his books, entitled Chess Fundamentals, and I thought it was great. It featured clear chess principles, backed by real master games and, what I believe it is most important in the book, all the matches featured in Chess Fundamentals are annotated by Capablanca, who focuses on what moves he saw best, the ones he didn't like and, most fortuitous, what he thought when he played those moves, as many of the games are his.

Unfortunately, as with any chess book, one must spend time to focus on the details and to revisit it as many times as it takes to understand and learn what Capablanca wanted to express. I've read the book as part of an iPad application called "e+books". You get the free application, this Capablanca free book, then you have to pay for any other there. What I found really nice is that the positions and moves in the book are mirrored by a chess board that allows navigation between moves, variations, going back and forth, etc. It really helps reading the book and I recommend it, especially for beginners. Using a real chessboard to mirror the moves might be best, but it adds a layer of discomfort and complexity that might deter someone from finishing the book.

The book is structured into 6 chapters, the last being a series of 14 games in which Capablanca either lost or won. He begins with some principles of the endgame, the part of a game that he considers the most important. If you recall, Josh Waitzkin also highly recommended focusing chess training on the endgame, where there are few pieces and the principles become clearer. Also, since some chess games end with mates somewhere in the middle game, there is less opportunity to learn that part of chess. For openings Capablanca has only a few words, focusing on the healthy development of pieces, which he considers the most important. As stated previously, the games are the most important and their complexity is pretty high. Some say that the book is not fit for beginners for that reason alone, but I disagree. Even the most complex strategies are explained in the annotations and I believe they are a rare opportunity for anyone to glimpse in the mind of a chess master and realize where their aim as chess players lies.

All in all a rather easy to read book, with the help of the iPad application, but very hard to completely understand and remember. I intend to return to it, several times perhaps, in order to internalize some of the cool patterns of thought I saw in there. I warmly recommend it.