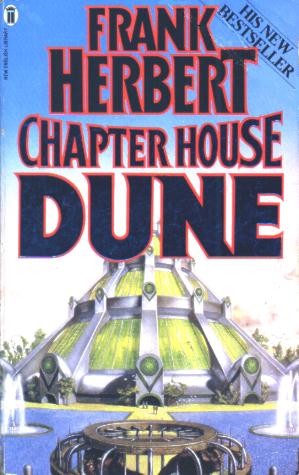 Oh, finally Herbert breaks the pattern up. His sixth and final Dune book, Chapterhouse, is brilliant, on par with the first, if you will. At the end of the book there is this little dedication to his wife, recently passed away, in which he thanks her for the beautiful years they had together. He describes her as his muse, basically. Perhaps that tragedy was what prompted such quality in the book. Or maybe it is just my personal preferences that make me see it as such a masterpiece.

The basic plot is that the Scattering is encroaching upon the centre, with the Honorate Matre being these vindictive tyrannical bitches that destroy everything in their path while flaunting a parody of Bene Gesserit organization. They are many and they have a lot of wealth and ships. Teg Myles returns as a ghola, Duncan Idaho is sexually bonded with the Honorate Mater Murbella, only bidirectionally, and there is only one last Tleilaxu master (thankfully Scytale, not that dolt Waff) under the protection of the Bene Gesserit. The book is all about survival; I liked that.

Now, there were some issues I had with previous books. The supreme arrogance and pomposity in Prophet of Dune and God Emperor of Dune was one. The ridiculous behaviour of Tleilaxu masters was another. Others can be overlooked, but these were really annoying for me. I am happy to say that Scytale appears as a cunning and intelligent opponent of the Bene Gesserit in Chapterhouse, while the supreme confidence the witches flaunt is proven to be a front, something that allows for their survival, rather than separate them from the human race. The ending is also quite interesting, but I can't spoil it for you.

Unfortunately, the year 1985 was the end of Dune and Frank Herbert. He died of a pulmonary embolism while fighting cancer. He had just re-married and Lynch's Dune movie had just been released. The film had little success in the US, but a lot in Europe and Japan (proving again that their audiences really stink :) ). Just in case you are considering watching the movie rather that reading the book, remember that, while Lynch really got the feel of the Dune book, the script makes the story unrecognisable.

Getting back to the book, it was a shock, the first time I read it, to know that it was the last. There are other Dune books, though, written by Brian Herbert, the son of Frank Herbert. I read none of those. The reason is that I believe the depth and subtlety in Dune was more important than the story itself. Instead I would urge the reading of other Frank Herbert books. Some were rather banal, but others (and here I include the WorShip universe and Hellstrom's Hive) were brilliant.

This was not supposed to be the last book of Dune. A seventh one was planned, but death stopped Herbert from achieving his goals. There was an old childhood friend of Herbert's who described him as always ahead, blazing trails, one step ahead. After reading all of the Frank Herbert Dune books, I feel that this is how the man really was, always thinking of the consequences of the past going into the far future. You would learn as much chess as you could, but when it was time to play Herbert, he would be inventing a new game.

I can't help but feel a sense of loss for everything that he didn't get to write. He died at 66 years old. He had at least ten more good years left. I am planning now to read the Brian Herbert books, as well, and then maybe continue with rereading all of Frank Herbert's books.

The man was not perfect - I know that there are people out there who write much better than he did - but Dune is truly a masterpiece, an ode to human ingenuity, a manifesto against stagnation, bureaucracy and the trap of repeating the past. Packed with some really astonishing wisdom, I do believe is one of the most rereadable books out there.