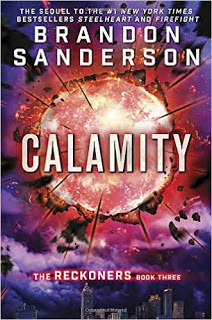 I've read the book in a day. Just like the other two in the series (Steelheart and Firefight), I was caught up in the rhythm of the characters and the overwhelming positivity of the protagonist. Perhaps strange, I kind of missed descriptions in this one, as both locations and characters were left to the imagination and everything was action and dialogue.

Brandon Sanderson ends (why!!?? Whyy?!!?) the Reckoners series with this third book called Calamity. You absolutely have to read the other two books to understand anything about it. In fact, Reckoners feels more like a single story released in three installments than a true trilogy. In it, the team has to reckon (heh heh heh) with their leader going rogue and have a decision to make: either bring him back or kill him. All this while fighting off various Epics in different stages of madness.

I can't really say anything about the story without spoiling the hell out of it. I loved the first two books and I loved this one. Indeed, I have yet to find a Brandon Sanderson book that I don't like. If you are into superhero stories, the Reckoners series has a refreshingly original plot, a wonderful main character and true debate about what heroism really is. I recommend it highly!