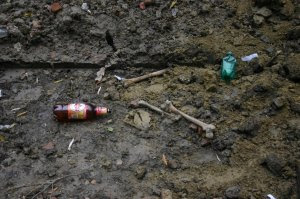 Translation:
Is it hard to describe the mixed feelings the medieval ruins in the Bucharest old center gave me. I passed by there for the first time (across the street from the Comedy Theater on Tonitza street) last week. In the space from the second image 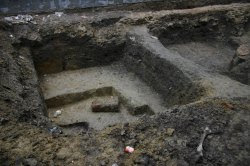 there were 4 people - a 50 years old Gypsy man, sitting in a squatting position and smoking a cigarette, a Gypsy woman of the same age, with all the Gypsy clothing arsenal (I have nothing against them, quite the contrary, but I want this description as clear as possible), digging like she would be working the field, and another Gypsy girl, 15 or 16 years of age, kissing with her boyfriend who came to see her at work. In the top-left corner there was a pile of bones, a complete human skeleton, cranium included, and on the edge of the hole there were bags of food - lunch for the four workers. Yesterday I went there again and this time there was nobody there. I took the pictures you see. Today I passed through again and it was the same situation as yesterday. On the French street there were 10-15 workers digging, aged between 15 and 60 years old, multiple ethnicity and some of them were either drunk or very drunk. They wore no protection gear or uniforms. Some wore Adidas type shoes (and working in mud), no one had gloves or protective helmets. I asked them about the archaeological site and why there were hundreds of years old human bones laying around... They said they didn't know and that people had come before and taken some in big bags. I asked them if their bosses ever came to see them and they said that they do that, once or twice a day...