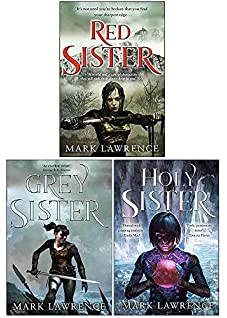 The Book of the Ancestor trilogy consists of Red Sister, Grey Syster, Holy Sister, books that tell the continuous story of Nona, a girl with magical powers who is trained as a warrior nun by the church on a feudal world called Abeth. It feels almost the same as the Harry Potter books: a school for children where they learn only exciting stuff like magic and fighting and where the group of friends that coalesces around the main character has to solve more and more complex and dangerous problems. And it pretty much has the same issues, as any of the actors in the story could have easily handled a little child regardless of her powers because... she's a child! Also, the four "houses" are here replaced with genetic lines that provide the owner with various characteristics.

Anyway, I liked all three books, although I have to say that I liked them less and less as the ending approached. Tools used to solve some problems were not used for similar issues later on, the girls were learning more and more stuff and become more and more powerful, while all of their opponents seemed to lack the ability to reach their level even with greater numbers and funding and, maybe worse of all, whenever it was inconvenient to detail the evolution of the characters and the story, Mark Lawrence just skips to some point in the future. Thus, each of the last two books is separated from the previous one by two years!

Another qualm that I have with the series is that the author spent a lot of effort to create a magical world, with a dying sun and with a vague history that may or may not have involved spaceships and an alien race, with various magical tools that can be combined to various and epic effects, with several kingdoms, each different from another. Then the story ends, as if all we could or should ever care about is what happens to Nona.

Bottom line: if you liked Harry Potter, you might want to read this series. It pushes the same buttons, while getting less and less consistent as more stuff is added, then leaving you wanting more of the world that was described, even if you didn't especially liked the characters or their choices.