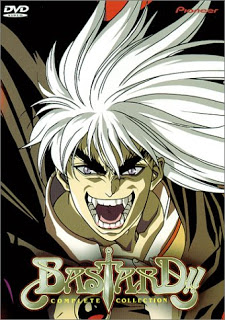 Bastard!! is an adaptation of the manga with the same name. The manga itself is ongoing, but very slowly. At the moment of the writing it had 138 chapters. The genre of it is magical fights in an action comedy kind of style. Bob Samurai has a video review of it.

For myself I have to say that I had fun watching it, in a mindless "I come from work and I don't feel like doing anything" kind of way, but it wasn't that special in plot, animation or feeling. The "anti-hero" is actually the typical hero that does incredible good deeds for the love of women and the biggest source of humor are the few lines peppered throughout the episodes that break the fourth wall. Stuff like "What would have been the purpose of defeating that guy when we were off screen" or "a handsome hero like myself couldn't possible lose to one as ugly as you". The manga is a little bit more about the scoundrel nature of the main character - as it should be, there are 70 chapters (the Host of Shadows) covered by mere 6 episodes of the OVA - but it is also rather different from the anime: more story detail, more types of magic, etc. Probably the OVA, as quick dirty fun as it was, is not a very good one, since it relays only bits and pieces of the manga.

One can watch the anime at AnimeDreaming, read the manga at MangaHere and watch BobSamurai's video review on YouTube.