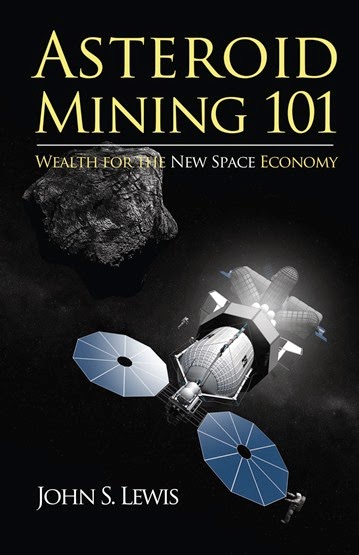 If you are interested in astronomy and the kind of space science that can be applied now, not in some distant future, this is the book for you. It describes the technical aspects of asteroid mining, an industry that is in its infancy (or should we call it still in the womb?), but is the only thing that can plausibly connect humanity to space. There will be no habitats on Mars, no colonization of the solar system, no interstellar travel - not for humans, not for robots, without the resources contained in asteroids. It is a short book, but filled with information and, as Lewis himself says, You presumably did not buy this book to be hyped by some huckster. If you did, I hope you will be sorely disappointed and not recommend the book to like-minded friends.

Dr. John S. Lewis is the chief scientist for Deep Space Industries, a space mining company that requires a separate blog post just to familiarize people with it. He is a world renowned asteroid resources scientist, with many written papers in the field, and also the author of Rain of Iron and Ice and of Mining the Sky. I hear you may consider these two part of the same series and, thus, you should probably try to get them before you read this book, even if it stands alone nicely.

Asteroid Mining 101 is filled with many pages on geology, minerals and general chemistry. I have to admit it is not what I expected, however true to its title. I thought I would read a little about asteroids, familiarize myself with the general concept outside my general knowledge of it, then read about the DSI's technical designs for spacecraft that would be used for prospecting and mining asteroids. Instead, it is a description of the concept of asteroid mining, followed by deep analysis of the issues that are involved and possible solutions. Reading it, one realizes how far we are from designing robotic miners when we haven't even developed the mining techniques that would work in space. Almost universally, the methods used on Earth rely on either gravity or heavy use of air, water or liquid fuels. It was therefore my first intention to criticize the book for being too geological in nature, but I end up praising it for it.


The book is structured as follows:

From these, mineralogy and classification take more than half of the book. The mining scenarios section is small, but understandably so: Lewis tried to make this book as lacking in speculation as possible, and I have to admire him for that. This is not a book to make you dream, it's a book to make you think. This has the downside that there are no discussions on the politics of the matter, with the exception of nuclear fission energy not being politically feasible for spacecraft propulsion. Even if requiring speculation, I would have welcomed a discussion on the possible uses of asteroids as planetary weapons, conflicts in space or even the legal chaos of who owns what and what enforces law. The author is neither a military man, nor a lawyer, so these are subjects for other people.

Several ideas stand out in the book. One of them is that the true valuable resource in space is water. It is abundant and useful for everything from propulsion to radiation shielding and sustaining of life. The so called precious minerals are completely different in space, yet bringing platinum metals to Earth would have a very little profit margin and a very short one, until the market stabilizes on the planet. On the opposite side of the spectrum, nitrogen would be the limiting factor of an industry that could theoretically sustain millions of billions of people, while fissionable materials like uranium or plutonium would be almost missing. Energy has the same problem. In space, solar power would be the main if not the only source of energy, while the types of fuel used on Earth would be either too expensive to use, impossible to produce or irrational to produce (like high energy fuels containing nitrogen). Metals like titanium and aluminum would require too much energy to extract from the stable compounds that they are found in and are of little general use in space. Return on investment cycles would be long in space, maybe longer than the average political cycle. And so on.

Actually, I would say that this is the main idea of the book: how different a space economy would be, from the technical to the administrative. Problems that are insurmountable on Earth are easy in space and the other way around. What we need to make this work is to develop the techniques required, from the ground up (I know that this expression presupposes gravity and a planetary surface, but let's go with it), because out there we need to relearn everything from the beginning. It shows the potential of the asteroids in the solar system, the possibility of expanding the human civilization millions of times its current size, then it presents you with the difficulty of planning all of this from Earth, where everything is different. It is one of the books that demonstrate unequivocally why we need to go out in space and why we need to stay there: we need to begin to "get it".

In a way, and that is my speculative contribution on the subject, it is also a sad book. It makes it obvious how difficult, if not impossible, it is for the average Joe, commuting to work every day, worrying about mortgages and child education options, to understand what awaits us in space. By extension, how impossible is for politicians to do anything about it, even if they understood the concept and wanted to actually do something. Therefore, the need for private initiative is made clear and evident.