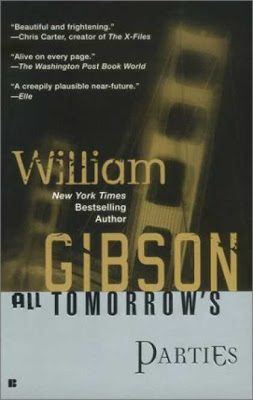 All Tomorrow's Parties is part of the Bridge trilogy, together with Virtual Light and Idoru. Placed in a world that is not too distant from our own, but changed brutally and irreversibly by the advent of new technology, it features some of the same characters as the previous books and tells the story of nodal points, as viewed through the eyes of Laney, the quantitative analyst, and of the people that are inadvertently in the middle of profound change. Laney is a guy that can sense accretions of data intuitively, because he was subjected to trials of some weird drug, and he notices a large nodal point, a place where data points to a change in the way the world works.

I will let you read it and see what this is all going towards. I must say that it felt like an easier book than Idoru, maybe because it has more action sequences and (a bit) less descriptive prose. It is a strange thing to understand the world of Gibson's imagination and feel so strongly about it, yet in the same time see that the world is not really going there. The details that the author infuses in his stories make all of his books seem part of reality and, having finished some story, I feel that the world around me is a bit fake. I believe that is a mark of a great writer.