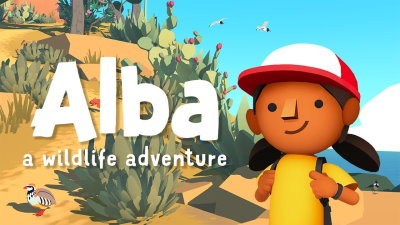 Recently I've been to Madeira, a Portuguese island colony with a powerful blend of nature, culture, feudal interests and overall corruption. The game Alba: A Wildlife Adventure made me feel like I was back!

First of all, this is a game that was clearly done with a lot of heart. Every aspect of the gameplay is fun, positive and well crafted in all the things that matter. After playing the game, not only was I happier and more content, but I felt refreshed by imagining the pride the creators must have felt designing and finishing development. There is NO sense whatsoever of cutting corners, trying to money grab or following any political agenda (other than wildlife conservation, if you count that one). In spirit, it reminded me of the Sierra Entertainment Games.

The plot is also very refreshing: you are playing a little girl who has grandparents interested in nature and which inspired her to care about life as well. Returning to a fictional Spanish island of her early childhood, Alba will clean up the island, photograph all kinds of animals, help them survive and thrive and fight commercial interests that threaten the island's wildlife. It is a casual gameplay - to the point that whenever you don't find something you are looking for, it means you just have to end the day and it will magically appear in the future for you - in which you explore a lovely island filled with birds, beautiful flora and tropical climate.

What amazed me most was that there are 51 species of animals portrayed in the game and every one of them is behaving like the actual live species. The walk, the flight patterns, the speed, the sounds, they are all very precise (in the confines of a pretty simplistic graphical interface). Then there are the little things like when you have to make a yes/no decision you use the mouse to bob the head vertically or horizontally. There are no places where your 3D character gets hung up in some wall or caught between obstacles or  seeing/passing through objects. Even the interaction with objects take into account where the player is looking, it's not just a lazy area effect where you can just move around and press the action button aimlessly.

Another nice thing is that I can imagine small children playing this game and feeling inspired and empowered, while at the same time adults understand the ironic undertones of some of the scenes. Stuff like the little girl gathering garbage from the ground and putting it in the bin, then talking to a native of the island sitting on a bench nearby and complaining about random stuff. Or everybody condescendingly commending the girl for her efforts, but mostly doing nothing to help. Or even phrases like "oh, yeah, it was a great idea to fix the stairs. Why didn't I do it before? Oh, well, it's good you did it".

The only possible complain I might have is that the game is pretty linear and the replay value is small to nonexistent. But for the few hours that it takes to finish (which was good for me since I am... married

), it was refreshing and calming.

I admit, I am not a gamer. This might be just one of a large category of similar games for all I know, but I doubt it. I worked in the video game industry and I am willing to bet this game is as special as I feel it is. I warmly recommend it.

Here is the gameplay trailer for the game: