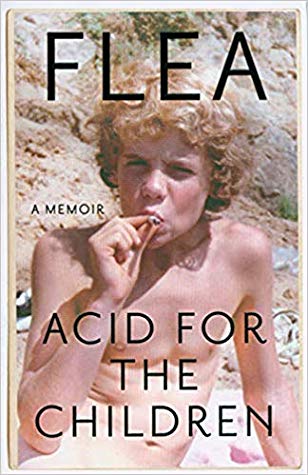 Want to feel old? Flea (born Michael Peter Balzary) writes this memoir at 57. In Acid for the Children, he covers his life from childhood in Australia up to, but not including, the Red Hot Chili Peppers era. And it's a nice book, one of those autobiographies that are written with honesty and nostalgia and that shares the lessons the author learned during his life.

Michael was a scrawny kid, with either physically abusive, alcoholic or indifferent parent figures, born in a poor family. Yet his spirit was that of an artist, so he did what kids like that do: lots of risk taking, misdemeanors just for the sake of it, lots and lots of drugs of all kinds. In the book he thanks his guardian angels for not getting HIV or other life ending diseases or addictions. By the time he got noticed as a base player, he had escaped most of the mentality and came to grips with his parents. He even leans towards snowflake territory at the end there. The book is loosely chronological in order, made of various anecdotes. How he remembers stuff from his childhood with so much detail when I don't remember what happened ten years ago is a mystery, but that's how some people are.

It's always good to read books like these. Makes you see the world with different eyes. In Flea's case, he made me realize that people do drugs from different reasons: some want to reach a potential they feel is right under their skin, they use them as tools to uncover themselves and when they do, they reach a place of bliss and pure joy. Others want to get to the bliss and joy directly, with no talent or drive to talk of, so they become addicts and "losers". Perhaps that's a kind of uncovering themselves, too. He also made me realize that you need some life experience to be able to access the emotions that are required to do art. It may seem obvious, but when our highest drama is who said what on Twitter or how beautiful is the scenery in a tour guided vacation, we don't have that experience. Lost to this illusion of safety in efficiency as cogs in the machine we lose not only our individuality, but our chances to even become people.

Bottom line: Flea is a really nice guy, if he can say so himself, and it becomes clear as the book progresses that he had that from the very start, he just had to jump through some hoops to make that work for him. I am glad he made it. I liked the book.