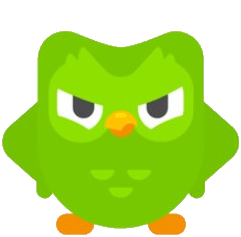 About a year and a half ago I installed DuoLingo and started going through some of the languages there. The app was advertising itself as "The world's best way to learn a language" and "Learn languages by playing a game. It's 100% free, fun, and scientifically proven to work." And in the beginning it was. You could go through simple but increasingly complex lessons and advance in level, exactly as promised.

And then whatever happened to mobile apps everywhere happened to DuoLingo as well: incessant ads, with garish colors and loud sounds, overtly lying about what they are advertising for. They changed the internal currency of DuoLingo, started to ask for more things just to get the normal stuff needed to learn a language, like the short stories that are the only part of the app that teaches the language in context. Lately they added speed games that no one can finish without spending the currency they've amassed, but increase the points one gets, so puts pressure on everyone to either play the games or spend a lot of effort to not fall behind.

And for what? After getting to the third level in a language, I started to take every section and finish it (take it to level 5). There is basically no difference between the lessons as the level increases. You never get to complex sentences, learn new words or gain any new knowledge. You just go through the motions in order to get a golden badge or whatever, while filling in sentences about newspapers. Yes! I don't know if you remember them, they're very important in the universe of DuoLingo.

Also, there is a huge difference between the way lessons work for different languages. You want Spanish of French, you get different games, a lot of stories and so on. You want something more obscure like Dutch, you don't even get stories!

So continuing to bear with obnoxious commercials just in order to use the app "100% free" is too exhausting, while the benefits are now minimal to none.

I also doubt this is any way to learn a language. I am not able to understand speech in the language that I've spent months working on, there are very few sentence composition lessons that cover reasonable scenarios likely to meet in real life and the vocabulary is extremely limited. And limited in a stupid way: instead of learning words that one would use in everyday sentences you learn things like newspaper and apple and rabbit.

Let's be honest here: I only went with Duolingo because it was easy. It gave me the illusion that I am doing something with my time while playing with my smartphone. If I really wanted to learn a language I would have listened and read in that language, I would have found people speaking the language and chatted with them, whether directly or in writing, I would have taken the list of the top 100 words used in that language and I would have created and written down sentences using those words until I could do it in my sleep. That requires effort and commitment and it is obvious that I wasn't going to spend it. That's on me. However, the state of DuoLingo, particularly compared to how it started, is the fault of the company.

Conclusion: not only has DuoLingo become a cautionary tale about applications that advertise how free they are and will ever be, but it wasn't a good app to begin with and they never invested much into improving it. All development efforts in the last year have been on how to get you to pay for the app, what clothes Duo the owl wears and stupid time consuming animations to "motivate" you. Gamification has become the goal, not the means to achieve something worthwhile. So, with a heavy heart because of losing all the gems I've gathered and my 550 daily streak, I will be stopping using DuoLingo.