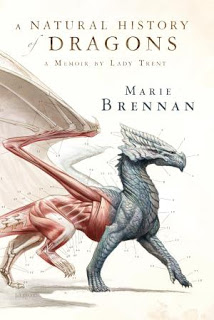 Written as a 19th century explorer's memories, this book subtly achieves several things, effectively and decently. First of all, it is a sort of fantasy, although really if one removes the dragons, it's pretty much normal history. Second of all, it is a feminist story, but one done well. Instead of describing the horrible things done to women by evil cardboard characters, we get an intelligent and driven female hero that makes the most of her advantaged situation to expand her goals and enrich her life, despite social norms, but supported by friends and loving family. She is young, attractive, but not extraordinarily so, and her fascination towards dragons and science books leads her towards a career normally reserved for men. She is inspiring as a model, rather than complaining about her helplessness. She gets by through her efforts and skill, not by magically being gifted super powers. The fact that the action is set in a reasonably old period so that folk don't get touchy about it, but close enough so that it describes people that thought themselves the pinnacle of civilization helps with making the reading comfortably remote, but seriously instructive. Thirdly, it is written in an easy to read way, a personal memoir that can be understood by adults and children alike.

As such, I think A Natural History of Dragons is one of the few books that can claim to have made the world a better place, as it provides both escapist pleasure and educational value. That doesn't mean it's a perfect book. Marie Brennan's educated Victorian noblewoman style starts off as refreshing, but quickly gets old, the details providing less and less context and just filling up space. The book is well written, but at times I just wanted to get past the way people were dressed or how the architecture influenced the mood of the main character. The title is misleading at best, as the story is marginally related to dragons and instead focusing on one person and her incidental fascination with them. You learn almost nothing "scientific" about dragons but you sympathize while you observe this young woman desperately trying herself to understand more.

In conclusion, this is a book that I would gladly give to a hypothetical young daughter to read. As an adult, it is light enough to be enjoyable. The world is built thoroughly and perhaps the next books will be more action packed, while expanding on our view of it. The story is a bit lackluster, but nothing to complain about. It reads as a light fantastical autobiography. A more alert pace would have made it more accessible, but it would have probably detracted from the character's voice.