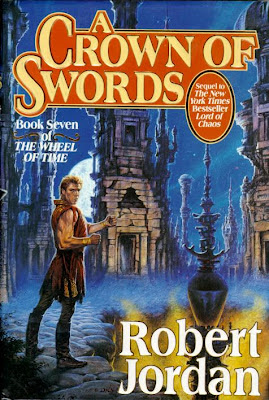 The seventh book of the Wheel of Time series is a direct continuation of the sixth. I was saying in a previous post that book six, Lord of Chaos, was long and it doesn't even have a complete ending; A Crown of Swords overlaps Lord of Chaos a little, then opens up some other doors and doesn't close them either. Either this is the pattern (pun not intended) of the next books, or this is actually a weave (ok, now I was doing it on purpose :) ) of at least three books that are strongly coupled to each other.

A Crown of Swords is back to a size closer to the average of the other books, but since it is so connected to the books before and after, it doesn't really matter. There is a lot happening and some of it is captivating. I can't really empathize with most of the characters, though, except maybe Mat, and he is very present in this book. A new evil type of darkspawn appears, along with an advanced type of Myrddraal. The girls are hunting ter'angreal, the Seanchan are stirring again and a new battle against Forsaken is close. Also an Aes Sedai hero is approaching Rand and completely dissing him. Fun stuff!