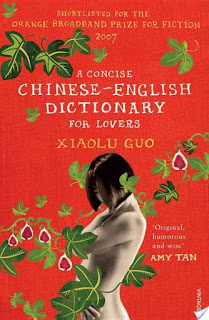 What starts as a slightly humorous book about the differences in perspective between the Chinese and the Western world turns into a deep insight into the raw psyche of women. That's not a nice place, BTW.

The thing that pops up immediately is the style of the English language in which the book is written. Xiaolu Guo creates this character who is a female Chinese coming to England on a year long visa to learn the language so she can get a better job in her native country. A Concise Chinese-English Dictionary for Lovers is written as her diary and, true to character, her English is really bad, but getting better, so that at the end of the book it is rather decent. Some things that Zhuan, the protagonist, is thinking are sometimes really funny, but sometimes feel really artificial, so much so that I scoured the Goodreads reviews of Chinese people to see if there were many exaggerations and it seems that the verdict is NO! In that respect, the book shocks a European by how weird the mindset of a Chinese country woman can be, so I consider it a win to have read it.

Also, the book is rather short, so unless you really dislike something about it there is no reason to not finish it up once started. However, the starting premise of the book is immediately changed when she meets this older Englishman, who lives life by the day, dabbling into art that he doesn't really care about and making ends meet by driving a transport van, which he hates. However he is well educated and, besides boning the young Chinese girl, also doubles as her English tutor. So it turns into a love story. But wait, it's not all roses, as her perspective over life (the woman that takes care of the household and makes babies and the man who provides for the family) is completely at odds with his views on intimacy, privacy and personal goals.

In the end, I have to say that if you want to start hating the relationship you're in, you should read this book. Like the Chinese concept of Yin and Yang, the two characters in the book are complementary, but separate, archetypes of the male and the female and the great attraction between them cannot nullify the classical disparities on their value systems. I don't know about women, but as a man I started to hate the pitiful neediness that Zhuang was exhibiting and I totally understood how the distance between the two people grew. I despaired when I read her thoughts on her own actions, when she knew what she was doing was hurting him and their relationship, but she found herself unable to stop.

What's worse is that, being archetypes, none of the characters compromises in any way, so I believe the reader is then faced with their own failings, but also with their compromises, laid bare, made evident and seeding regret. In that regard, it is a brilliant book. It pits West against East, male vs female, real vs ideal. It's not for everyone though. While I do not regret reading it, I don't think I would have read it if I really knew what it was about.