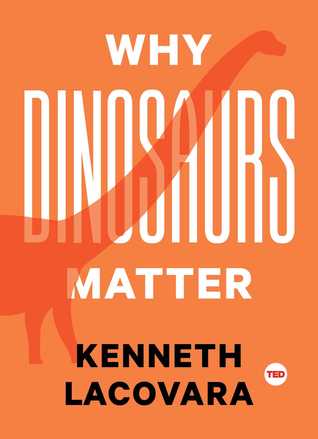 We are all racists. We belittle dinosaurs for getting extinct, we pump our chests and declare we are the highest pinnacle of evolution and they are inferior, failed experiments of nature, we, mammals, are clearly the superior product. Yet they existed and flourished and ruled every ecosystem on Earth for hundreds of millions of years. Even today the number of species of birds, the direct ancestors of dinosaurs, is more than double the number of species of mammals. Kenneth Lacovara starts his book with a similar assumption: Einstein was a schmuck! Every one of his great achievements means nothing because, in the end, Einstein died. If that idea is ridiculous for him, how come we still use it for dinosaurs?

Why Dinosaurs Matter is a short book, one in the TED Books series, and it pretty much adds detail to Lacovara's TED talk, like all of the TED books. Frankly, I am not very happy with the series, as it often adds little to the ideas summarised in the talks themselves. Some people are spending a lot of effort to summarize existing books into 15 minutes bite size media and TED books do the opposite, adding fat onto already fleshed out ideas. That doesn't mean this book is bad. It is well written, it has a lot of useful information, but it felt disjointed, like a combination of an opinion piece and a history book of discovered fossils. It gets its point across, but that's about it.

And the point is that we can learn a lot from dinosaurs, from how they spread around the world, adapted to all kinds of environments and the biological innovations they brought on with this. We can learn from their apparently absolute dominion and their immediate and humiliating downfall. Being at the top of the food chain is not only a matter of prideful boasting, but also a fragile spot with multiple dependencies. Once the natural order is disrupted, the top of the pyramid is the first to topple.

Bottom line: it is a nice introductory book in the world of dinosaurs, but not more than that. It's short enough to read on a long train ride or plane flight and it can be easily read by a child or teenager.