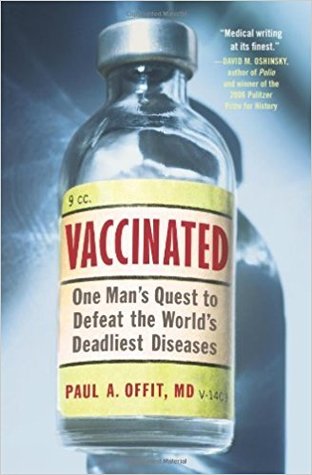 Vaccinated is an ode to Maurice Hilleman, a rather modest man with a big heart who worked tirelessly towards making vaccines for serious diseases and taking almost no recognition for it. Clearly biased towards the man - Paul A. Offit positively worships him - but informative and well documented.

And it is not only about Hilleman, although he was a giant in the domain of vaccination and affected most important decisions in it. For example you learn about Andrew Wakeman, the man who, while financed by the Personal Injury Lawyer for several families that were suing pharmaceutical companies, imagined a connection between vaccines and autism, a move that has repercussions even today. You also learn about how hepatitis vaccines were tried on mentally challenged people in asylums. Doctors, including Hilleman, convinced themselves that they were attempting a cure for a disease that would eventually affect their guinea pigs and who, when ill, would have no resources to go to doctors or receive proper medical attention. And you learn about how vaccines are the only medical devices that can virtually eradicate disease, often with just one cheap dose for life, therefore there is little incentive for big pharma to invest in them. As opposed to something more lucrative like alimentary supplements, pills that just alleviate the symptoms, etc.

It is a book worthy of a read, that teaches a lot about what a vaccine is, how to make it and why and how it works. Also why some cause problems that then are misinterpreted by the general public.