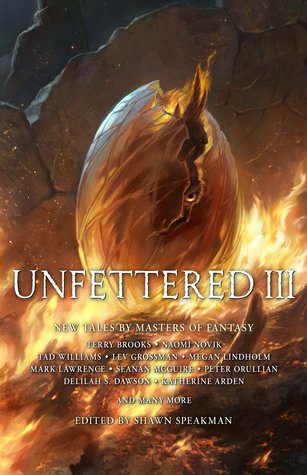 It has been a long time since I've finished a book. I just didn't feel like it, instead focusing on stupid things like the news. It's like global neurosis: people glued to their TV screens listening to what is essentially the same thing: "we have no control, we don't know enough and we feel better bitching about it instead of doing anything to change it". I hope that I will be able to change my behavior and instead focus on what really matters: complete fiction! :)

Anyway, Unfettered is a very nice concept thought up by Shawn Speakman: a contribution based anthology book. Writers provide short stories, complete with a short introduction, as charity. The original Unfettered book was a way by which writers helped Speakman cover some of his medical expenses after a cancer diagnosis and the idea continued, helping others with the same problem. This way of doing things, I believe, promotes a more liberating way of writing. There is no publisher pressure, no common theme, writers are just exploring their own worlds, trying things out.

Unfettered III contains 28 shorts stories from authors like Brandon Sanderson, Lev Grossman, Mark Lawrence, Terry Brooks, Brian Herbert, Scott Sigler and more. Funny enough, it was Sanderson's own addition to the Wheel of Time literature that I found most tedious to finish, mostly because I couldn't remember what the books were about anymore and who all the characters were. But the stories were good and, even if the book is twice as large as I think it should have been, it was entertaining. Try it out, you might enjoy this format.