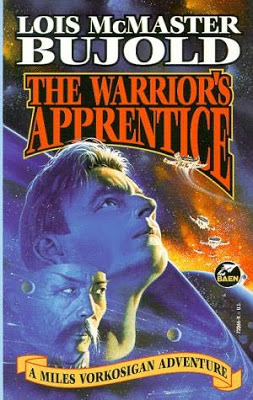 The word that I think best describes the book is "naive". That's not necessarily a bad thing; people have been hooked by naive stories since forever. Isaac Asimov had some very simplistic plots where everything was going well for the main character. The Harry Potter series was also what I could call naive; didn't hurt it much. From the same perspective I can say that The Vorkosigan Saga, which now spans about twenty novels and short stories, had its share of success (and three Hugo awards) no matter what the writing style. That writing style should have evolved anyhow as each book was written.

Back to The Warrior's Apprentice, though. It's about a kid, son of royalty on his home backward planet, who singlehandedly buys a spaceship, runs a blockade, creates a mercenary force, fools everybody that he is older, is smarter than anyone and also foils a ploy to destroy his father. And the drama is, as teenagers go, that he doesn't get the girl. Now see why I call it naive?

However, I am sure I would have gobbled the whole series up when I was fifteen, so, even if I have decided to not read the other books in the series, it depends on what your tastes are. The Warrior's Apprentice is an easy to read, easy to follow, shortish book. As a travel book I guess it would be decent.