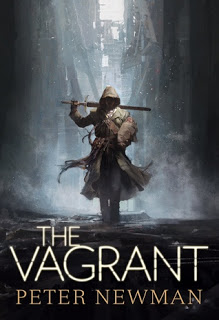 I read the book before I knew it was part of a trilogy, but of course it is. I would have personally preferred to have the first book as standalone, particularly since it had an almost open ending. It would have made it clear that the story isn't that important as the character. But hell, there is no mystery anymore, even in fantasy.

The Vagrant feels like a mix between Shogun Assassin and Samurai Jack, as it features a sword bearing silent type - well, he's a mute - walking with a baby through a desolate, part feudal part futuristic landscape, while demon essence is threatening to corrupt the world.

Peter Newman even uses a style of writing that often discards definite articles. A sword slashes, a man falls, a demon howls, stuff that happens, inevitably, randomly, viciously. I liked that the main character strives to survive, but he is not indomitable. He gets doublecrossed, wounded, almost killed. He doesn't win every battle and when he does, it is difficult every time. Luck saves him several times and some people he wants to save cannot be saved. Towards the end this tendency falters and he becomes a little bit too knighty for my taste. Abstract and stubborn principles start to rule him, he starts fights that he need not fight, jeopardizing his mission. However, that ends up playing a big part in the last part of the story, setting up the next books, I guess.

The demons are interesting, too. Creatures of corrupted flesh and demonic essence, they are just trying to survive in a world alien to them, while ruled by instincts alien to us. I liked that they were not boring empty clichés of evil and were almost sympathetic. I've long dreamt of a story that tells the story from a demon's perspective, hunted by religious jerks who want to destroy it and the dark magicians that conjured it who want to control it. I mean, wouldn't you be pissed off? This book is very close to that perspective.

Funny enough, I thought the scenes with the baby and the goat were really well done, as the author describes their internal mental processes with gusto and humor, without them being pointless comic relief scenes. Newman seemed to understand how children and animals navigate the world.

In conclusion, I liked the book. I would probably continue to read the series if not for having other books that I want to sample. It is stylistically interesting and the characters are well constructed, while leaving the main story a bit in the background. I liked that. At least at this time I enjoy reading character centric books more than the ones that focus on plot and ignore the people involved in it.