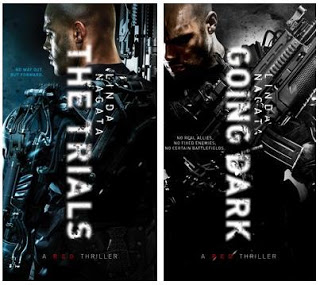 Having been so pleasantly surprised by First Light, the first book in The Red series, I quickly read the next two books: The Trials and Going Dark. However, possibly due to my high expectations, I have been disappointed by the continuation. Linda Nagata seemed to have reached that sweet spot between current tech trends and emergent future that makes stories feel both hard sci-fi and realistic. The integration between man and machine, the politics run by shadowy megarich "dragons" from the background, nuclear bombs detonated in major US cities, artificial intelligence and so on. The potential was immense!

Yet, the author chose to continue the story on the same flat note, like an ode to the Stockholm Syndrome, where the hero gets repeatedly coerced to run missions that at first seem bullshit, but in the end are rationalized as necessary and even dutiful by himself. The common intrusion of external forces into his emotional balance by way of direct brain stimulation also makes his feelings and motivations be completely isolated from the ones of the reader. A strange choice, considering the vast possibilities opened by the first book. Frankly, it felt like Nagata liked writing the first book and then was forced by publishers to make it "a trilogy", since that is the norm for fantasy and science fiction, but her heart wasn't really in it.

I don't want to spoil the ending, such as it is, but I will say it was disappointing as well, with no real closure for the reader of any of the important questions raised in First Light. Too bad, since I felt the story was beginning to touch on important subjects that needed to be discussed at a deeper level than just "boots on the ground".