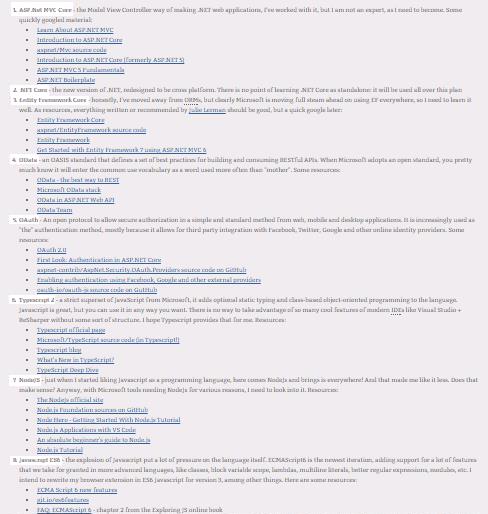 In September last year I was leaving my job and starting a sabbatical year, with many plans for what seemed then like a lot of time in which to do everything. I was severely underestimating my ability to waste time. Now the year is almost over and I need to start thinking about the technologies in my field of choice that I need to catch up with; and, boy, there is a lot of them! I leave the IT industry alone for one year and kaboom! it blows up like an angry volcano. To be honest, not all of these things that are new for me are just one year old, some I was just ignoring as I didn't need them for my various jobs. Learn from this, as especially in the software business it gets harder and harder to keep up to date and easier and easier to live in a bubble of your own or your employer's creation.

This post is about a list of programming topics that I would like to learn or at least learn to recognize. It's work in progress and probably I will update it for a time. While on my break I created a folder of software development stuff that I would "leave for later". As you can imagine, it got quite large. Today I am opening it for the first time. Be afraid. Be very afraid. I also have a lot of people, either friends or just casual blog or Twitter followings, that constantly let me know of what they are working on. As such, the list will not be very structured, but will be large. Let's begin.

Yup, there are more than 50 general concepts, major frameworks, programming languages, tools and what not, some of them already researched but maybe not completely. That is not including various miscellaneous small frameworks, pieces of code, projects I want to study or things I want to do. I also need to prioritize them so that I can have at least the semblance of a study plan. Being July 21st, I have about one full month in which to cover the basic minimum. Clearly almost two subjects a day every day is too ambitious a task. Note to self: ignore that little shrieky voice in your head that says it's not!

Being a .NET developer by trade I imagine my next job will be in that area. Also, while I hate this state of affairs, notice there is nothing related to WPF up there. The blogs about the technology that I was reading a few years ago have all dried up, with many of those folks moving to the bloody web. So, I have to start with:


So there you have it: less than 20 items, almost two days each. Still bloody tight, but I don't really need to explore things in depth, just to know what they are and how to use them. The in-depth learning needs to come after that, with weeks if not months dedicated to each.

What about the rest of 35 items? Well, the list is still important as a reference. I intend to go through each, however some of the concepts there are there just because I am interested in them, like DNS, Riffle, Bitcoin and Bittorrent, not because they would be useful at my job or even my current side projects. Data mining and artificial intelligence is a fucking tsunami, but I can't become an expert in something like this without first becoming a beginner, and that takes time - in which the bubble might burst, heh heh. Mobile devices are all nice and cool, but the current trend is for tablets to remain a whim, while people divide their experience between laptops and big screen smartphones. The web takes over everything and I dread that the future is less about native apps and more about web sites. What are native mobile apps for? Speed and access to stuff a browser doesn't usually have access to. Two years and a new API later and a web page does that better. APIs move faster nowadays and if they don't, there are browser extensions that can inject anything and work with a locally installed app that provides just the basic functionality.

What do you think of my list? What needs to be added? What needs to be removed? Often learning goes far smoother when you have partners. Anyone interested in going through some subjects and then discuss it over a laptop and a beer?