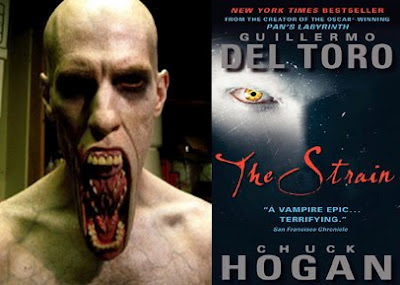 Yes, it's that Guillermo del Toro and he wrote a book, together with this Chuck Hogan dude. Actually he wrote more books, this is part one of the Strain trilogy which, judging by the name, should have been about either a contagion or some sort of pulled muscle, but instead is about vampires.

Now, I don't want to be mean towards poor Guillermo. Vampires, even if really overdone nowadays, are pretty cool. The ones in the book are not even sparkling or talking with a Russian accent, but are vicious creatures that have in mind only one thing: to feed. That makes them the more believable type of vampire, although the technical details that are trying to explain in scientific terms the process of vampirification are complete rubbish.

The book is about a contagion of sort, that of vampirism. A "master" comes in New York (where the hell else), wreaking havoc and turning everybody to vampires. They even say this type of vampire is a virus incarnate, although the analogy gets a little strained (get it?). An old Jew is the only one who knows what vampires truly are and how to fight them and he teams up with this New Yorker epidemiologist (and later a pest control rat hunter second generation Russian) in order to fight this asshole vampire.

This melange of different cultures gives opportunity to talk about the Holocaust and 9/11 and even Romania, all at the same time! The writers shamelessly abuse this without actually connecting these facts with the story in any significant way. That bothered me. I understand people can become a little obsessive over things like this, but what kind of a jerk keeps using them to further their careers and books? Anyway, before turning this into another "stop using Hitler, the Holocaust and 9/11 as arguments" extension of the Godwin law, let's get on with the book.

The writing itself is not bad. The only things that kept me getting out of the atmosphere of the book (except the shamelessness above) were some of the emotional background stories used to describe the beginning of the infestation. I would blame that on me, though, as I am often prone to get annoyed by the feelings of others, especially when they get in the way of a good storyline.

Being a trilogy, the book doesn't really end at The Strain. It's just a broken shard of a whole story. You get some hints on what would happen and also some of the arches are closed by the end of the book, so it isn't completely annoying.

Bottom line: Hmm, it was good, not really a masterpiece. It reads like a movie, with a simple almost linear plot. The thing is that, even if it managed to convey the terror of such an occurrence in general, it didn't really evoke in me feelings of horror or at least some empathy with characters that feel that horror, and that is what I was looking for. I've read the book in under a week, but I am not really prepared to spend another two reading the continuation.