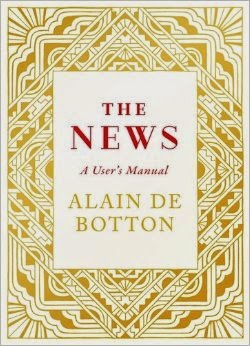 The News: A User's Manual is a short book that reads like a thesis for improvement of the way news is reported. Why, asks Alain de Botton, is news trying harder to be "accurate" than to tell the entire story so that people can understand and feel it? Basically it is the old Star Trek trope when Spock or Data or Seven of Nine tell the time in milliseconds when all was actually needed for the purpose on hand was how many hours more or less. Just like in there, the news, as seen by the author, does not understand either what the whole story is (lazy reporting) nor what people need (or indeed what the purpose on hand is). Like a global organization struck by autism, it just repeats the same terrifying and intimidating bits of human suffering, only to ignore the good, the humain, the inspiring and the overall effect on the audience.

I will put is clearly: Botton is right. However, he is discussing news from the perspective of human betterment. Just like people eating too much and exercising too little that the news organizations are being paid from, they couldn't suddenly do what is right as opposed to what brings the money or the audience likes to see. Some of the points he makes could, presumably, be used in national televisions, the ones that should be apolitical and tasked towards the education of the audience, not towards making profit. Alas, such televisions do not exist anymore, I think. I believe, however, that the book was never designed as a how-to manual for news organizations, but for the people watching it. Imagining the news style that Botton is describing can make us, the viewers, understand not only why we watch the news as they are, but also what they do to us.

The book is split into several chapters, all of them containing sections which contain at least an introduction, a description, a comparison, an analysis, a damage report and a suggestion for change:
What I found interesting was the psychological analysis of why we are attracted to some types of news items and what effect they have on us. I especially liked the comparison between "terrible tragedies" and the original Greek tragedies. According to Botton, telling what happened in 100 "unbiased" words is less engaging or instructive than going deeper and explaining the situation and the motivations of the people that did terrible things. Why, it is so much easier and comfortable to condemn a murderer of children as "sick" than to try to imagine what he has in common with you and in what situation you would snap that horribly. However, that teaches you and educates you more in life.

The Botton line (heh heh) is that without context, any information doesn't mean anything and makes us feel nothing. To overcome this, news makers are showing the most brutal and shocking things that they are allowed to show, just in order to elicit some semblance of interest. Instead, giving us the whole of the story, making us aware of how people from distant places live before stuffing down our throats how they died, might be more memorable and instrumental to make us feel something useful.

I found myself comparing news media to the justice system. There, a trial with no representation and due process is considered a sham. Both sides need to tell their story to the best of possibilities. If every news item is like a trial, its purpose making the audience judge a situation or a purpose, surely the same must be true. I do believe that Botton would have made his point more popular if he would have taken the stance of the lawmaker than the one of the psychologist. On the other hand, that would have deprived me of an instructive book that exposed many of the mechanisms through which the news is making us feel good while causing so much (hopefully) unintentional damage.

Not everybody is happy about his book, especially professional reporters. Here is one review from The Guardian: The News: A User's Manual by Alain de Botton – review

More helpful, here is a video of Alain de Botton himself discussing some points made in the book: