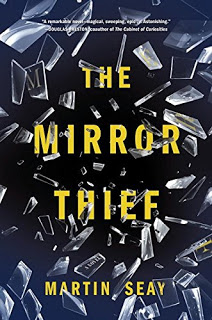 The Mirror Thief is a really interesting book. It is well written, original in ideas and Martin Seay has his own unique writing style. It is also a very deceptive book, always changing shape, misleading the reader over what he is actually reading.

The book starts in Vegas, with a black former military policeman named Curtis arriving in search of a certain Stanley, in order to give him a message from a friend. The story feels like a detective-noir, but immediately there are things that just don't belong. The apparent mystical talents of Stanley, the very detailed descriptions of the surroundings, using rarely met but very specific words. At the time I thought I was going to read some sort of mystical noir thing akin to Cast a Deadly Spell.

But then the plot switches to the story of Stanley when he was a kid, hustling people on the street and doing various other bad things, his only anchor a book called The Mirror Thief, a poetry book that describes the adventures of a certain Vettor Crivano in Venice at the end of the 16th century. While he doesn't really understand what it is about, he feels that the unnaturally meandering book hides some sort of universal secret. As a reader, you start to doubt what you have read until now. After all, aren't you reading a confusing meandering book with a lot of unexplainable details? Stanley has traversed the United States in order to find the author of the book and ask him to reveal the mystical secret that would give him the power he craves.

And just when you think you figured it out, the book reveals a third story, that of Crivano himself, but not in poetry and apparently unrelated to the book about him. While he is an alchemist and physician, his best skill appears to be fighting, and he only uses it effectively at the end. All main characters: Curtis, Stanley and Crivano feel absurdly human and flawed. Curtis carries a gun everywhere and he doesn't get to use it once, while being disarmed multiple times. He doesn't get what's going on up until the very end. Crivano is also deceived several times, another pawn in the big game of life. Paradoxically Stanley is the one most in control of his life, mostly by rejecting everything society considers normal or even moral and choosing his every step.

To me, the book was most of all about perception. The reader is confusedly pinballed from perspective to perspective, even with each of them painstakingly detailed. While reading the book you learn new words, old words, history of three different times and places and intimately get to know each character. When you get tricked, you are just following characters that get tricked, disappointed or set up themselves. The three stories are really completely unrelated, at most red herrings when mentioned in the others, and offer little closure. It is all about understanding there are other ways of looking at the world.

Bottom line: Martin Seay is often accosted by readers begging for explanations of what they have read. You cannot read the book and not feel it is a good book, but actually enjoying it is a different thing altogether. At the end you start thinking about the book, about the world, about yourself, wondering if you didn't just read the whole thing wrong and whether maybe you should start over.