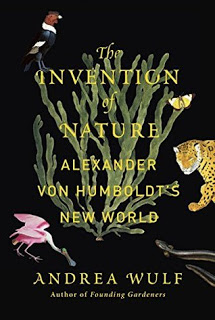 The Invention of Nature is an ode to Alexander von Humboldt, the man who has practically invented our concept of nature, inspired Darwin and Goethe and Bolivar and Jefferson and so many others, created the ideas of ecology, Gaia (although it wouldn't be called that for some time), global connection between volcanic activity. He was among the first to popularize the idea that man's mindless exploitation of nature cannot last and will have dire consequences. The last true polymath, Andrea Wulf calls him, and on paper he seems a god: an avid reader, a great thinker, fluent in many languages, exploring on foot tirelessly until in his seventies, dabbling not only in natural sciences, but also politics, social revolution, physics, drawing, prose and poetry. He had been actively writing and corresponding until well in his eighties. The quintessential 19th century romantic scientist, he was interested in everything and anyone and wrote incessantly. At one time he remained out of money because he was paying for the publication of all his books, being interested in spreading the knowledge, not profit. He was collecting rocks, insects, plants, soil samples, etc. then he would send them to other scientists who were interested, for nothing in return.

His view of nature and the cosmos (term that he coined) permeates the vision of our society even now. So how come so few people know about him? To my shame, that includes me. I vaguely knew the name, but had no idea how grand his influence is. Wulf's explanation is that after the first world war (and I guess the second didn't help, either) an anti-German sentiment spread in Europe and America, leading to burning of books, lynching of German people and an overall erasure of anything Germanic from culture.

Now, half of the book is almost exclusively a Humboldt biography and it is awesome! I was imagining how great it would be if someone were to make a TV series about it (Netflix and National Geographic, I am looking at you!): so many details, so many adventures, so many important people of the age. I think the book would have been more accessible if it would been just that. But then the author also described some other people who were influenced by Humboldt, and while knowing that Darwin venerated the man and did everything he did from the moment he read one of the man's books, the others were less interesting or important.

Even so, the other people cover less than a quarter of the book... the rest is acknowledgements, bibliography, references, etc. Andrea Wulf did a wonderful job researching this and bringing Humboldt to life for me. Even if the ending of the book was not as satisfying as the beginning, it's hard for me to rate this any less than excellent. You need to read this!