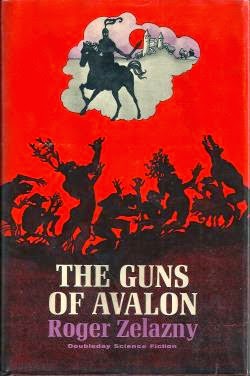 The Guns of Avalon continues the story from the moment the previous book ended. Roger Zelazny is taking his Corwin character through some shadow land towards Avalon, where he might find the answer to his desire to claim the throne: an explosive agent that works in Amber.

His plans are soon thrown into disarray by several happenings. We meet the smart strategist brother Benedict, another blood relative Dara, we meet Gerard as well as learn a little bit more about the Amber world. However, the dispassionate style of writing as well as the dispassionate style of reading the book by its very author, made me feel close to nothing about the characters or events described. Again, I felt like learning nothing, as all the interactions between characters are very shallow and there is nothing described in enough detail to expand on the knowledge of the world or on some skill that the characters have. The author has attempted to show in the book that Corwin is a compassionate man, saving women from rape and wounded men from dying, helping his friends and being reluctant to dispatch or even harm his treacherous brothers, yet it all comes out like some guy playing a multiple option game: "Do you want to save the woman or keep going?" "Oh, what the hell, let's save the woman, see what happens". The ending of the book comes down brutally, solving several problems in a very lazy way, avoiding any controversial decisions that Corwin would (and should) have taken and introducing a magical nemesis that has no reason to exist that the reader would care about.

I am starting to feel that I've stumbled upon a dud. Two out of ten books to go (five if we consider that from the sixth book there will be a different main protagonist), and the only reasons I keep going are a promise to finish the series and my lack of strength for doing anything else.