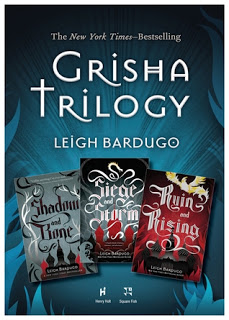 The Grisha trilogy (or The Shadow and Bone series) is, as the name implies, a series of three books that comprise the entirety of a story about a young orphan girl and her childhood friend growing up to find they have powers and need to battle evil that only they can vanquish. Yes, it's typical young adult stuff.

The refreshing bit about this series is the Slavic flavor that permeates the story. The names are Slavic, the legends and history are similar to the ones around Russia, and if you read not the books, but the short stories, you get that nice hopeful dread that one can find in old Russian legends: things can be nice, but most of the time you can only hope for instructional and survivable.

That leaves me at an impasse. I liked the books, but compared to the expectations created by the short stories they are pretty crap. I mean, you get that Twilighty romantic triangle thing (it's more of a square, really), and so much potential from characters that are tortured by a rough childhood is just wasted on pointless romance dancing around. The first book is clearly the best, but then Leigh Bardugo falters and writes the rest of the story more and more traditional... not to the Russian folklore, but to Hollywood bullshit. The evil guy gets more and more evil, for no actual reason, the characters get more and more righteous, for no reason other than being juxtaposed against the evil guy, secondary characters get killed off randomly, with no gain from the effort made in defining them, while primary characters get more and more entangled, again, for no good reason. The worst offence, in my view, is that the author bothered to create this Slavic world of impoverished peasants fighting neverending wars with neighboring countries, only to basically end it all with a happy ending. In order to bring the story to a popular finale, she massacred an entire universe, not unlike the villain of the series.

Bottom line: an interesting and easy to read young adult story that unfortunately ends much worse than it had begun. Instead of continuing to explore the truly adult themes of loss, betrayal, learning from mistakes, surviving trauma, etc, it caves in to the easy romantic and tired idea of light versus dark, losing all other color in the process.