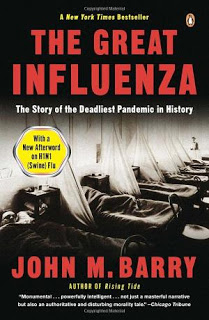 Who writes like this in this day and age? Around 10% in the book I was convinced The Great Influenza was written sometime in the middle of last century, when people still did painstaking research and paid attention to every detail, not like now, when researching something involves trying different Google keyword combinations ad nauseam. And how many people can pack so much information and knowledge into a book that is also easy to read and incredibly captivating? Apparently, John M. Barry, with this book published in 2004.

I can't stress enough how much I liked this book. I would give it 6 stars out of 5 just because I rated books with 5 stars and this is an order of magnitude better. Imagine that I only found it because I was curious about the influenza epidemic from 1918, what is popularly known as The Spanish Flu, and at the time I was worried that one book on the subject would clearly not be enough. Not only would it present just one point of view, but surely various interests or lack of resources would influence (pun not intended) the end result. Instead I was shamed, that is the right word, by the amount of care the author used to research and write this book.

In order to explain what the book is about I would have to write a lot about The Spanish Flu, a disease that killed between 50 and 100 million people globally within six months in the middle of a five year world war that killed just 20 million in military and civilian deaths combined. Yet very few people care about it or even know about it. There are few documents about it, no movie that I know of, very few books. Inside the pages of The Great Influenza are the seeds of a dozen Steven Spielberg war movies, various crossings of The Outbreak with The Knick and a few Netflix series - I find it criminal that no one thought about it so far. Therefore, I urge you to first read a little about the disease itself, on Wikipedia and Google like normal people, then read this book. It will blow you away.

John Barry is clearly an investigator at heart. Not only does the work for this book, but clearly empathizes with the people who fought to understand disease and find cures, locked in laboratories and sacrificing everything for understanding. He calls them The Warriors, the name of the first part of the book, where he describes the history of medical science in the Unites States and the people how would ultimately champion it further and fight the outbreak. The second part (out of ten) describes the disease: a type of influenza so virulent that it makes the immune system destroy the body it's supposed to protect. Only from the third chapter on we start reading about how the pandemic started, what influenced its movements, how people reacted and so on. The last two chapters are solely about the after effects (almost as important as the ones during the pandemic). A whopping 10% of the book is just notes and thanks and references.

Also relevant, I think, is the fact that Barry is American and clearly proud of it. The book has a very American centric view, not only because of the nationality of the author, as probably because it would have been a lot more difficult to research the actual events in other parts of the world. Yet even for an American patriot the book is filled with outrage at the way governments and local authorities and narrow minded bureaucrats treated the disease and the people affected by it. For an European as I am, the way a fanatical American president managed to turn an entire country into a weapon, effectively disabling the values that Americans are known for: democracy, freedom of speech, pursuit of happiness, etc, is beyond chilling. America was a sleeping giant way before Pearl Harbor and the way it awakens and consumes everything and everyone that stands in its way is ironically similar to the way the influenza virus swept the world. One of the main reasons people don't know about the disease is because any mention of it that could have affected morale during times of war was censored in the land of the free. The name Spanish Flu itself comes from the fact Spain was not censoring its media at the time.

Bottom line is that I urge everyone to read this book. It's a wonderful example of how one man can dedicate seven years to research and document something as scary, monumental and mysterious such as the great influenza pandemic of 1918, analyse it from multiple viewpoints, name, quote and praise the people who were right in the midst of battle, the unsung scientist heroes of unheard of laboratories and the people who gave them the wind under their wings. Great job, John Barry, great job indeed!