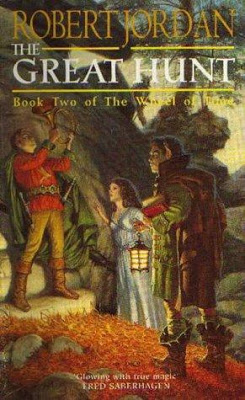 I have to admit, the quality has increased dramatically in both writing and storyline in this second part of the Wheel of Time series. Robert Jordan's The Great Hunt follows our heroes in their quest to heal Mat, deliver the Horn of Valere and escape the endless machinations of the Aes Sedai.

I was saying in the review of the first book, The Eye of the World, that the story was ridiculously black and white, reminiscent of Lord of the Rings. The Great Hunt features good and evil Aes Sedai, sympathetic Darkfriends, political Cairhienians that see every action (or lack thereof) as a move in The Great Game of lords and not less than three new major threats, not counting the Black Aes Sedai, as well as parallel worlds, resurrected heroes and epic battles. So there is a good range of shades of grey, washing away the simplicity with which the series started. The characters gain volume, developing in their own unique ways.

There are some issues, though. Rand is exhibiting wonderful skill and ability exactly when needed, being pretty much clueless most of the time. Women again appear rather one sided: proud, intelligent, manipulative and always in some way of authority over men. The "The wheel spins as the wheel wills" quote is used way too much and the blatant logical hole ignored: if it does, then no one needs to get involved in anything, especially the Aes Sedai. Nynaeve find a new strength and acts more like a Wisdom and less like a scared little girl.

So I am caught up in this. Too interested to start reading the tech book I was planning and too much work at the office to really feel the need to. Let's see how the next book in the series will be.