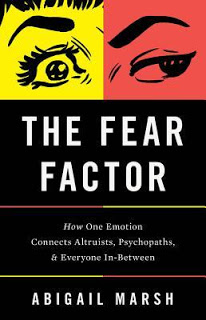 You remember when you had to write a paper for college and you had the thing that you wanted to say, but then your coordinator told you to make it a chapter, and then add others that are related for context? This book kind of feels like that. In English it is called The Fear Factor, but the Romanian edition calls it "Altruist or being good without reward" (my direct translation, as Good for Nothing didn't feel right, even if it is the title of the book in the UK), showing that even editors didn't really agree with the author on the right way to label it.

Overall, what Abigal Marsh tries to say is simple: our capacity to do good to others without expecting a reward stems from an ancient mammalian mechanism designed to bond mothers to children and it is triggered by our ability to empathize with the fear other feel, while regulated by a network of brain centers, mainly our amygdala and hippocampus using the oxytocin hormone. This takes the book through eight chapters, each kind of separate and which I liked in different measures. The ones describing carefully crafted experiments and their outcomes I liked best, the ones that felt like fillers or the ones affirming that correlation doesn't imply causation then proceeding in describing a lot of correlation less so.

Marsh goes out of her way to portray a positive image of humanity, where most people are generous, empathetic and altruistic. She describes people who aren't capable of it - psychopaths and their amygdala dysfunction, people on the other side of the curve - superaltruists who don't care to whom they do good, they just do it, goes to very interesting experiments and comes with theories about how and why altruism, fear and empathy work. Her conclusion is that our focus on negative things makes us falsely believe things are getting worse, people less trustworthy, when the actual opposite if overwhelmingly true.

Bottom line: I liked the book, but some of the chapters felt forced. I didn't really need the exposition of her beach trip to save the turtles or how much she feared and then appreciated the help of a random guy who looked like a hood thug. Most of the information interesting to me was concentrated in the first chapters, while the last, explaining what to do to become more altruistic and how that improves our well being and filled with international statistical charts on altruism I could have done without entirely. It's not that it wasn't correct or well written, it just felt like an add on that had little to do with the book or, worse, was there just to fill up space.

If you search on TED Talks, you will see the author have a talk there titled Abigail Marsh: Why some people are more altruistic than others.