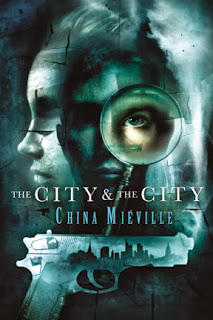 I have not read any of China Miéville's works, but I have received a positive recommendation from a friend and decided to read The City and The City, thinking that I would read a science-fiction story. Instead, it is a fiction filled police procedural - a detective story - placed in a city that is, at the same time, part of two different countries. There is a detective, set on finding the murderers of a young girl, who during his investigations takes the reader through the internal workings of this weird place and leaves us with the concept that we all, as city dwellers, are silently and cooperatively complicit in the evil perpetrated around us. Interesting, indeed, but quite a shallow concept to be transformed into a book, even one written by such an obvious talent as Miéville. There is also a sad reason why he wrote the book such, as a present to his terminally ill mother who enjoyed detective stories.

But back to the book. It is fascinating to observe a place where an establishment, a person or even an object are part of one city or another based on physical characteristics such as certain colours, a certain gait or a certain way to make a common gesture. This idea is the soul of the book and the rest just a pretext to explore it. Anyone breaking the boundaries between the two cities is immediately and absolutely punished by a shadow entity called Breach, which appears next to anyone even focusing too long on a place from the other city and maintains the "skin" between the two different nations. Miéville does not explain, really, what caused such a split, why Breach was formed and even how it does what it does (and indeed, how it did the same thing for thousands of years). The point of the book is not to root into reality the concept of this shattered place, only to explore its possibility. And it does this skilfully. The issue I had with the book is that, except for this brilliant and original idea, you are reading a police procedural, plain and simple. I was in the mood for something else, perhaps.

My conclusion is that it is a very well written book, one that is worth reading, but not something that could be considered brilliant except for the seed idea. Outside that idea, which has been pretty much detailed in this post, the plot is a standard detective story.