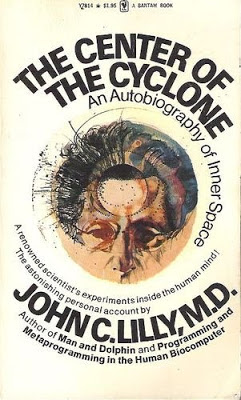 I wanted to read this book as I knew the author experimented with LSD and sensory deprivation tanks. He was the inspiration for the brilliant film Altered States, which I enjoyed immensely. The third book of John C. Lilly, The Center of the Cyclone starts as an intense book, an exploration of the deep mind using arcane and sometimes forbidden techniques. A magnificent beginning... and a horrid ending.

Let me start from the beginning. Lilly is a psychoanalyst and a neuroscientist at the same time, perfect skills to explore and understand the limits of the human mind. He first starts his experiments with dolphins, trying to understand them and communicate with them. He starts an entire institute in order to research this field, but the book is not about that, but about the period starting with LSD experiments. At the time he begins taking the drug, it was legal. Parties were held where people would share the experience and entire schools of therapy were using LSD to facilitate access to the mind.

Having previously tried experiments of sensory deprivation, a sort of shutting down of all outside stimuli in order to explore inward, he attempts to mix the two techniques: LSD and sensory deprivation tanks. Something opens up and he gains access to repressed memories, deep understanding of self and incredibly fast and precise advances in pinpointing psychological hurdles, trauma points. Till this point, I have gobbled up the book, resonating profoundly with the scientific method of exploration aided by chemical substances that eliminate the barrier between consciousness and subconscious. But then it all changes.

If you intend to read the book and make up your own mind, I suggest you stop reading the review now and start with the book. I am going to express my own opinions on what I read there.

What I think happened is that Lilly had the spiritual openness that allowed him to connect empathically with himself and others, something I believe resides in the right hemisphere of the brain. This openness is facilitated by the catholic upbringing that he is subjected to as a child. He himself, under the influence of LSD, retrieves a repressed memory inside a church where he starts seeing angels flying around. He confesses this to a nun and she, bitchy as she was, gets terribly upset and tells him that only saints can have visions, not a seven years old boy. This makes him forcefully lock the door that he had opened in himself. But now, after he has dedicated himself to science and logic, he stumbles upon this drug which unlocks the memory and so the initial skill.

This should have been a momentous occasion, something to combine perfectly the scientific mind with a strong spiritual/emotional side. Unfortunately, he was truly unprepared for it all. From a scientific book, it quickly devolves into yogi and Eastern spiritual practices, combines knowledge gained from experiment with hearsay from ancient texts, mixes hallucination with perception. He acknowledges that he started writing the book, then, after experiencing all of this spiritual avalanche, he decided only the first three chapters were worth keeping. Unfortunately, those are the first three chapters that I loved and that made sense.

It is not just my own subjective disgust for his abandonment of reason that makes me think the book follows up with personal involution, but also the way the book is structured, the writing style, the use of information at the end which had not been introduced previously... it all gets worse.

Now, he is the second scientist I've read that reports some sort of mental or at least emotional connection at a distance, the first one being Kary Mullis, who also seemed rather wacky and experimented with drugs. I really wanted to believe that, as well as many of the extraordinary things reported in the book, and wanted to explore them for myself. But now... I am not so sure. Be it the LSD or some sort of giving up to the emotional side, I see this book as a diary of going bananas and not realising it.

That doesn't mean that the book doesn't contain valuable knowledge. The fact that, single or under guidance, the man could access hidden memories and background "programs" after the first LSD experience makes the entire business of psychotherapy laughable with their lengthy discussions and careful probing. Various methods to access the trance necessary to explore your inner spaces that don't even involve chemical aid (like the looping of a word and listening to it until entering the desired trance state) I bet are perfectly functional. Also, there was one collaborator of Lilly's, Ida Rolf, that used a technique combining deep tissue massage and trance to unlock the repressed memories that affected body stance.

Many more interesting and very useful facts are hidden in the book. Alas, it is difficult if not outright impossible to separate wishful thinking from actual fact, garbage from science. Or maybe, who knows, I am so biased that I can't understand some essential truths in the book. I guess it is up to you to read the book and decide for yourself. I loved the beginning and loathed the ending.