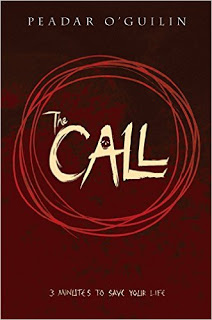 I've seen several very positive reviews of The Call, by Peadar Ó Guilín so I started reading it. A few hours later I had finished it. It was good: well written, with compelling characters, a fresh idea and a combination of young adult and body horror mixed with Irish mythology that hooked me immediately. I was sorry it had ended and simultaneously hoped for and cursed the idea of "trilogizing" it.

So the book follows this girl who can't use her legs because of polio. She is a happy child until her parents explain to her the realities: Ireland is separated from the world by an impassible barrier and the Aes Sidhe, the Irish fairies, are kidnapping each adolescent kid once, hunt them and hurt them in horrific ways, as revenge for the Irish banishing them to a hellish world. When "the call" comes, the child disappears, leaving back anything that is not part of their bodies and returns in 184 seconds. However, they experience an entire day in the colorless, ugly and cruel world of the Sidhe where they have to fight for their lives. In response, the Irish nation organizes in order to survive, with mandatory child births and training centers where teens are being prepared for the call in hope they will survive.

One might think this is something akin to young adult novels like The Maze, but this is much better. The main character has to overcome her disability as well as the condescending pity or disgust of others. She must manage her crush on a boy in school as well as the rules, both societal and self imposed, about expressing emotion in a world where any friend you have may just disappear in front of you and returned a monster or dead. Her friends are equally well defined, without the book being overly descriptive. The fairies have the ability to change the human body with a mere touch, so even the few kids who survive returned mentally and bodily deformed. The gray world itself is filled with horrors, with an ecosystem of carnivorous plants and animals that are actually made of altered humans, from hunting dogs and mounts to worms and spiders which somehow still maintain some sort of sentience so they can feel pain. I found the Aes Sidhe incredibly compelling: they are incredibly beautiful people and are full of joy and merriment, even as they maim and torture and kill and even when they are themselves in pain or dying, a race of psychotic vengeful people that know nothing but hate.

So I really liked the book and recommend it highly.