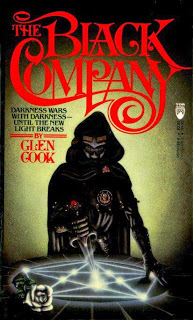 Another fantasy audio book, The Black Company is the first of ten of the ongoing series with the same name. Glen Cook probably thought about it for a while before writing it, because you can see that the first three books in the saga were published mere months apart (*cough*R.R.Martin*cough*). I was attracted by the story, because it seemed similar to my favorite Malazan Book of the Fallen series: a mercenary company fighting under the flag of powerful god-like magical beings that want to conquer the world. And in part the plot and characters were satisfactory. Alas, the many details and focus on small things like what games they played to pass time or what each character was like or maybe the narration style... I don't know; it all made it hard to focus on the story. I felt like the book could (and should) have been half in size, and better for it.

The main character is the doctor and analyst of the company, Croaker. Before your filthy mind thinks of other things, analyst in this context means he is a keeper of records, a chronicler of the company's history and, occasionally, the person who draws parallels between past experiences and current events. Croaker is an inquisitive person, often risking his personal safety to unlock a riddle or reveal a secret. Unlike Malazan, he is the lead character, through and through, and the company itself with its many soldiers and camaraderie just the backdrop.

Plot follows the Black Company in employment of The Lady, a powerful magician who wants to conquer the world, fighting the Rebel, a group of lesser magicians who have gathered the people of the land in response. Croaker has romantic fantasies about her, but throughout the book he discovers that his affections are misdirected, even if a strange relationship develops between them. Most of the story is about various battles, painstakingly (and painfully) described, only to be followed by the occasional interesting bit of character and plot development. In fact, I was kind of annoyed when I read the book summary on Wikipedia and I couldn't think of much that was left out. I mean, it's a big book.

The bottom line is that I am unsure if I want to listen to the rest of the series. While I can't say it was a bad book, or that is had weak plot or characters, I am reluctant to go through all that again for nine times. Basically I feel that the characters were never made empathetic enough, at least for me, and in the end all I cared about was what was going to happen next and how it would all end. In that case I would be better off reading synopses rather than listening to the entire thing. The overall structure of the story, though, has a lot of potential and I don't know if the series would not become really cool afterwards. To make the final parallel with Malazan, the first book in that series was not really making people eager to read the next, but it turned out to be great overall. I guess time will tell.