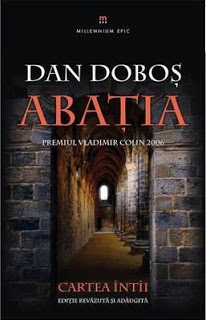 Dan Dobos is a Romanian writer and so I find it difficult to bad mouth his work. He also had bad luck with this one, as I'd just found one of the better writers of sci-fi and read a few of his books before trying to (re)read The Abbey.

Bottom line, The Abbey tries to be a Romanian Dune, with some Christian theology thrown about, a planet controlling the resources of the entire human dominion, people with heightened intelligence, instincts, subtle two way dialogs and verbal manipulations, etc. It fails. The characters are inconsistent, obvious, their best attempts at charade are ludicrous, their motivations are inedible, the whole human galactic evolution completely unbelievable. The writing style is also very shallow, made only of dialogue and inner thoughts, with little detail of what is actually going on.

Although I admire the attempt, the basic ideas and the fact that he got published in a country where people rarely buy books and if they do they don't buy Romanian authors, this series is a failure. Better luck next time.

An excellent trilogy! And, Romania is NOT „a country where people rarely buy books”.