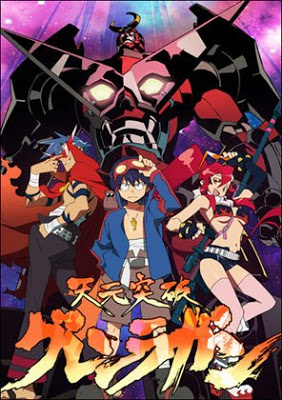 I usually don't like Mecha anime, with silly robots fighting battles that make no sense. I also dislike the Ecchi style, where young almost preteen boys and girls fall in love or are dressed in a sexual manner, with no sense either. At first, this is what Guren Lagan seemed to be. However it evolved into something else, and there is a pun in this phrase.

The series revolves around the "spiral power" (enough with the puns already!), the power of evolution, which allows people to get to new heights every time they meet an obstacle. Even if the animation was pretty basic and the story about always shouting robotic pilots that power their machines with the strength of their souls (geez! :) ), I just have to give it points for rapidly changing form and evolving in style.

We follow a bunch of "villagers" escaping from their underground almost stoneage dwelling and getting to the surface, where, in the course of 7 years, reach another universe and destroy the very beings intent on annihilating humanity with a robotic starship. Now that's fast :)

However, this is not it. What began as a simple courageous brawl twisted into a story about friendship, then despair, then rebuilding, going through the unforgiving politics of unintelligent human masses and ending with a galactic... no, universal battle for the survival of the human race, all in 27 episodes. I say not bad! I was expecting to see tens of episodes going nowhere and then ending suddenly when the funding was gone, but no, it was a complete story, evolving from the level of 7 year olds up to almost adult (in a timescale sense :P) level.

So watch it, it might surprise you. Prepare yourselves for really corny dialogs and a rather simple animation, though. Oh, also, you might find a Guren-hen movie that is like a summary of what happened from episodes 1 to 11 in the series. If you have watched the series already, the movie is made of fragments of it, so you don't need to watch it. If you are in a hurry and you have seen neither, watch the movie, then the series from episode 12 upwards.