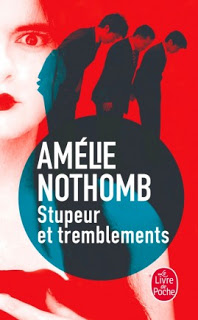 I have seen the movie on TV a while ago, but didn't catch the start, so I never knew what the name was. Finally, someone in a Romanian book club found the translated print here and reminded me of it and told me that it was based on a book. I've decided to read it in its native language, a bit scared that I would understand nothing of it, but the French is pretty easy to understand. Maybe because the author is Belgian :)

The story of Fear and Trembling is about a Belgian girl, born in Japan (just like the author), employed in a big Japanese corporation as a translator. Due to her inability to understand the local customs and the irrational feelings of her employers, she is demoted time after time until she ends up replacing toilet paper in the water closets.

The book itself is not meant as a comedy. The main character sees everything with a stoic detachment, analysing both her feelings and the feelings of others, trying to make sense of a world that she can't seem to fit in. It made me understand more than ever the illusory nature of reality. Both her and the Japanese were occupying the same space and time, were observing the same events, but their realities were completely different. That clash of incongruous realities is the core of this small novel.

A bit too French for my taste, not in the language, but in the endless repetitions of metaphoric interpretations of the same event, that overwording of inner thoughts that makes French writing sound pompous. However, I did enjoy the book, I recommend it to anyone wanting a light and distracting reading.