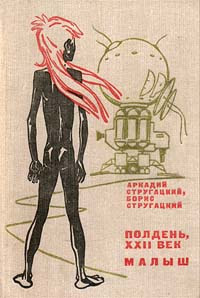 Space Mowgli is a short novel that describes, much like Solaris, the first contact with an alien race. There is a twist, though, as the alien is a human kid, modified to survive on a planet by unknown beings with unimaginable power.

You can immediately separate Russian scifi from American scifi.
The Russian space exploration expeditions are mostly civilian, led by the smartest and more rational scientist around, acting as the brain of the expedition; the characters are unique and react unpredictably, led by their own feelings or beliefs; their biggest problems are bureaucratic or social and mostly internal in the group.
In contrast, American scifi usually deals with military expeditions led by a charismatic or at least authoritative figure, acting as the heart of the expedition; the characters usually act within a strict set of rules which, if they chose to bend, they do as a group rather than as individuals, their greatest issues being external or technical.
I personally prefer the Russian version.

This particular book explores the way humans understand their own humanity, rather than a true interaction with an alien race. The aliens are there, but they choose not to be characters in the story. Each human character has their own view of things and of how things should go on. Reading the book, one is forced to evaluate humanity together with the crew of the expedition and the ending becomes irrelevant. The inner exploration of the reader himself becomes the story.

Bottom line: nice and introverted. Easy to read and rather short. Lacking a conclusion because their is no need for one. The Strugatski brothers considered this story the closest to their hearts.

I liked this review when I&#39;ve first seen it on Goodreads, and I think it&#39;s a good way to distinguish those two kinds of stories. I&#39;ve included a link to your review in my article about the Space Mowgli - https://alkony.enerla.net/english/the-nexus/sf-f-nexus/novel-review/arkady-strugatsky-boris-strugatsky-space-mowgli-1971-novel-review-by-kadmon