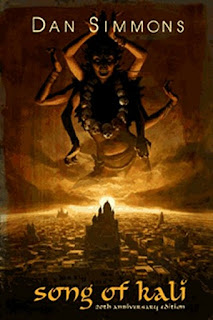 A friend of mine recommended this as one of his favorite books, so of course I went into it with very high expectations and of course I was disappointed. That doesn't mean it's a bad book, just that I expected more than I've got.

In Song of Kali, Dan Simmons describes Calcutta as a place of evil, in a culture of filth and senseless violence and death. He goes there with his Indian wife and their infant child when he is called to retrieve a new manuscript from a supposedly dead Indian poet. A lot of culture shock, a lot of weird mystical events and some weird and horrible people that do horrible things is what the book is about.

In 1985 this was perhaps a fantastic story, I don't know, but now it feels a little bit cliché: American man goes somewhere he sees as completely alien and where he feels out of place, usually going there with the family, so that the empathy and horror can be heightened, and where abnormal things he has no control over happen. It also part of a category of stories that I personally dislike: the "something that can't be explained or controlled" category, which implies absolutely no character growth other than realizing there are situations like that in which one can find themselves. And indeed the book is all like that: stories that make little sense, but somehow are linked to the perceptions and experiences of the protagonist, mysterious characters that do things that mean little unless the story takes them exactly to a certain point, at which you are left wondering how did they know to do that thing, and a lot of extraneous details that are there only to reinforce the feeling of disgust and dread that the character feels, but do little to further the story.

In the end, it is just some weird ass plot that makes no sense, a bunch of characters that you can't empathize with (some of them you can't even understand) and a big fat "It is so because I feel it is so", which is so American and has little to do with me. Others agree that the book is most effective when describing the humid fetid heat of the city and the inhumanity of its inhabitants and less with the so called "horror" in the text or the connection the reader feels with the characters. It brings to mind Lovecraft and his strong feelings about things that now are banal and CGI in every movie. Some are even more vehement in their dislike of the book. Here is another review in the same vein.

So how come so many people speak highly of the novel? Well, my guess is that it affects the reader if they are in the right frame of mind. My friend told me about the part that he liked in the book and, frankly, that part is NOT in the book, so whatever literary hallucination he had when reading the book I had none of it. My rating of it cannot be but average, even considering it's a debut novel that won the 1986 World Fantasy Award.