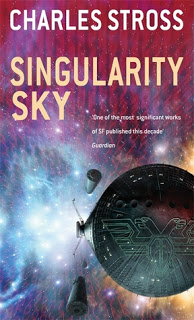 Charles Stross has a penchant for thinking big and then bringing that to the level of the average reader by the aid of pulp. That is why he is often discussing philosophical questions like what the world will be after millennia and what the consequences of time travel are or what if the Old Gods and magic were actually real in the context of a particularly handy tech guy who falls very easily in love and then spends the rest of the book saving the world and serving the one he loves. He is also an optimist who thinks people with all the information and power they could have will ultimately do the right thing with it.

While I love his positivism and the grandiose hard sci-fi approach, the pulp thing is a bit of a hit and miss with me. In the case of Singularity Sky, I think the pulp messed up something that could have been a very powerful metaphor of the state of humanity in the present day (and in any past day, too). But that doesn't mean the book is not good - I enjoyed reading it - but it doesn't even come close to another "singularity" book: Accelerando. I understand it's not fair to hold every single thing Stross wrote in the balance with what is probably his best work, but that's what I am doing, because I loved that one and I was meh about this one.

The story presents a subset of human starfaring civilization which chose to live in a similar way to the old Russia tzarist regime. Communication, technology and free speech and thought are strongly regulated and kept to the level of the 18th century in most cases. So what happens when one day phones drop from the sky that open two way communication with entities that could fulfill every desire you never knew you had? It is a very interesting metaphor to the way humans have lived throughout their history and how it is their choice and their addiction to monkey power games that keeps them in the dark ages. Also touches (very little) on why people would choose to live that way and how other might respect or disregard their right for that choice.

However, the main story is terminally fragmented by less interesting substories. Two spies, one in the service of the UN and the other helping the mysterious Herman, just have to fall for one another and waste precious pages. Feudal and imperial authorities have to spend pointless time to prepare a full military defense of their colony without even understanding who they were going to fight. Critics, a non-human-anymore species that starts the book as "criticizing" and the rest of it appears randomly and doing nothing interesting, except never getting the talking part right and sounding like Yoda. The list continues.

Bottom line: a fun read, but nothing more. A wasted opportunity for something a lot bigger. The author explains on his blog how the book came to be and why he won't continue the Eschaton series, which is probably for the best anyway.