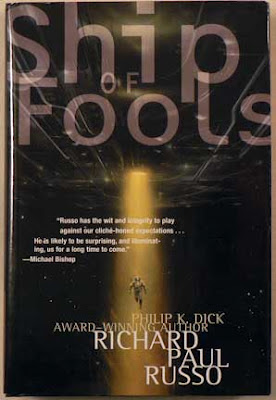 Ship of Fools is a sci-fi book written by Richard Paul Russo. It reads a lot like a journal, written in the first person, with little (or badly evoked) emotional involvement or dynamic action. Add to this that the main character is called Bartolomeo and he is on board of a ship with no history and going nowhere in particular, where there is always a struggle between the captain and the bishop and the people of the lower class, and you kind of get the impression you are reading a Spanish crewman ship log adapted to science fiction. The low focus on technology and the way people are thinking and acting increases the feeling that this is something futuristic only by accident, and the reality of it is some feudal world, only milder than one would expect those dark times to have been. Somewhere in the second half of the book the plot veers slightly towards Event Horizon, an opportunity to make some biblical references. Even then, the book is written in the same linear and descriptive way, despite being in the first person.

The title comes from a long existing concept in Western literature, usually depicting a bunch of ridiculous people travelling together, but without an aim, and also characterizing the society from which they came as a whole. However, the book doesn't really feel like a satire and the fact that it won the Philip K. Dick award in 2001 makes me think that maybe I missed something.

Bottom line: An interesting subject, but approached in a manner that I did not enjoy very much. I could empathize with the main character, but only to a point. When actual technical decisions were made, I thought everybody was kind of stupid. Luckily enough, it is not part of any series, it is a standalone book.

You are completely right. Even now I am not sure the author didn&#39;t dig some ship&#39;s log or an obscure book about ships in the Spanish fleet from somewhere and copied it &quot;in sci-fi&quot;. It certainly felt that way to me.

I thought the book was pretty good for about 75% of it, but it had a rather flaccid ending. It had all these mysteries adding up and you expected some of them to get answered, and instead the book ended with, &quot;Oh shit, run!&quot; and no explanation of what had happened. Supposedly he is working on a sequel, but the loose ends should have been tied up in a single book. (There were so many things that seemed extremely deliberate, like they were going to be significant later on either in terms of action or symbolism, and then... they were never used)