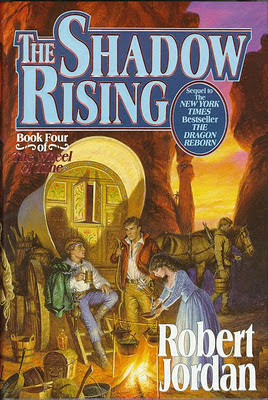 It seems that Robert Jordan is balancing the odd books of the Wheel of Time series series with the even ones. The first and the third books were kind of black and white, little grey in between, all good characters fighting the evil. Now, the second and the fourth seem to be more ambivalent. Does that mean that the fifth will be again a bipolar epic battle? I'm ready to find out! [grin]

In The Shadow Rising there are four different main stories that have little to do with one another, all happening simultaneously. There is the Rand arch, going to Rhuidean to fulfil the prophecies, accompanied by Mat, Eqwene, Moraine and the Aiel; there is Perrin, going back to Two Rivers to protect it from Ordeith, Whitecloaks and hordes of Trollocs; Elayne and Nynaeve are hunting Black Ajah; finally, the White Tower itself has some major problems.

The book was certainly entertaining, although not particularly deep. A lot of complex characters are relegated to doing cliché work, like Thom, for example. A large part of the book is focused on Perrin, while Mat is all but ignored. My favourite character Lanfear appears from time to time, too. Rand does weird things, making us wonder if he has lost his mind or just has a plan, but neither his companion nor the readers know what that might be. I liked the Egeanin bit of the girls story, but I can't tell you more for fear of spoiling it. Some really flashy and important battles are being carried out by different characters, although they are more literary show than substance, as battles go.

All in all, a reasonable continuation of the series. I think I am safe by now in saying that Wheel of Time is addressed to adolescents and will probably not evolve to something further to the end of the saga. Still fun, though.