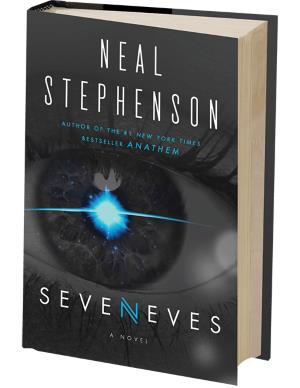 Neal Stephenson is known for writing speculative science fiction with focus on technological advancements and Seveneves is all about space. He thought about the idea in 2006, while he was an adviser with Blue Origin and he let the idea fester for years, while getting feedback from all kinds of people knowledgeable about and invested in space technology, like Planetary Resources, so at least the science is good. Personally, I believe that he gathered so much material that he just had to write the book, regardless if he had a story to tell or not. Never have I read a book that is so obviously written by an engineer, with long descriptions about how space stuff works and how a culture is like or how people solve problems. It's all about the how, never about the why or the who. As such, I consider it a failed book, because it could have been so much better as a well thought, well edited trilogy of books, with compelling characters, rather than a humongous enumeration of space technologies.

The story is split into three parts, mostly unconnected: the cataclysm that dooms Earth in two years and the solution found by the people of the planet, the cataclysm and what people do afterwards and the aftermath, 5000 years into the future.

What happens is that the Moon suddenly gets splintered apart by some unknown agent, possibly a miniature black hole, which just breaks it into seven pieces (it already starts with the number 7), that are destined to further break in collisions with each other and cause a catastrophic meteor bombardment of Earth, heating its atmosphere and boiling and smashing away all life. People decide to invest everything into expanding the International Space Station, having a few thousand people escape certain death by going into space. Everything is done very orderly and the book focuses exclusively at what people do to reach the stars, with today's technology. Nothing about what 7 billion people (see? I can use seven all over the place, too) feel or do when faced with certain doom. The book continues quickly over the inevitable deaths and accidents caused by rushing into something that is not really researched, proceeding towards a part of the story where almost everything just works, as by magic. The devastating problems that people would face in space are solved quickly by engineering solutions, ignoring the unsolvable ones.

So far the book does have a sort of a main character, a woman working with robots, sent to the ISS as part of a partnership with an asteroid mining company. Before we know enough about her, the story shifts into its second part, which splits attention between several important characters. At this point it is almost impossible to empathize with anyone, a problem compounded by using personalities "slightly towards the Asperger side of the spectrum", as the author points out several times.

To continue explaining the story is pointless and would spoil it, enough said that even as I am an engineer and always complaining that there is not enough science in science fiction, I got really bored with reading this book. Long long (mobile) pages of two of three paragraphs each, containing no dialog, explaining things that had nothing to do with the story, puny and underfed as it was. The only thing that made me react emotionally was the villain of the second part, who was written well enough to make me hate. To add insult to injury, after fighting through the 880 (normal) pages, the third part just abruptly ends, like he was just tired of writing, now that the tech was all explained away and there was some human story there.

Bottom line: As someone interested in the technology necessary to colonize the Solar System, this book should have been gold. Instead, I caught myself skimming over the long descriptions, just wanting the book to end. Too bad, since the subject could have easily been split into three or even several books, each with their own story to tell in a well structured fictional universe. Also, while the author swears he was "peer reviewed" on the concepts, he also admits making huge leaps of faith over what would work or not.