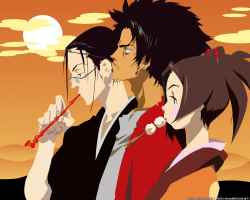 From all the animes that I've watched, Cowboy Bebop must be in the top three or five. It was an imaginative mix of space sci-fi and film noir, jazz and fight movies. The director of said anime, Shinichirō Watanabe, also did another anime called Samurai Champloo that I just finished watching. It is an imaginative mix of samurai era and Tarantino movies, hip hop and gangster movies. Even if it is sort of formulaic, this recipe for animes produced some pretty cool results. I thoroughly enjoyed the series and, at the end of the 26Th and last episode, I was crying for more.

The story revolves around three characters: a young girl looking for a mysterious samurai that smells of sunflowers, a samurai looking for purpose in life and a low life thug with an unconventional but deadly style of sword fighting. In the end, they meet some very dangerous people, thus ending the whole story arc. I have to say that, even if the fights in the main story arc were better and the emotions stronger, I enjoyed the other stuff, the episodes on the side, a lot more, even if most of the time they did not take themselves seriously... or maybe perhaps because of that very reason.

I completely recommend this to any anime lover, it is a nicely animated, with a cool soundtrack, and with an ingenious story.