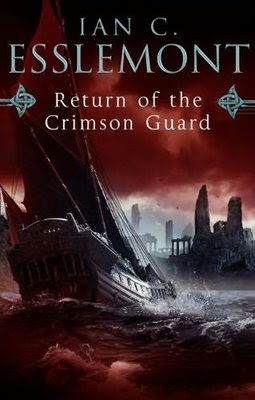 If there was any doubt about the style of writing and book structure for the first novel from Ian Cameron Esslemont in the Malazan universe, the second book: The Return of the Crimson Guard, dispelled any. One can barely see a little more focus on action than on description compared to Steven Erikson, but, having read it, I feel like this is the tenth novel in the series, not the second in a parallel Malazan world.

First of all, it is a full length book, similar in size with the ones written by Erkison. Again we see an amassing of forces, set to converge towards the climactic end. There are the Avowed of the Crimson Guard with a full army of mercenaries in tow, there is Lasseen, empress of the Malazans, there are Seguleh, man-beasts, D'ivers, Soletaken, mages of huge power, Claws, Talons, Seti, Wickans and the all pervading regular Malazan soldier, with focus on our favourite sort: the sapper :)

I have to say that the writing is so similar to Erikson's, that it even acquired the same problems. There is a lack of finality to just about anything. One just knows that a lot of questions will remain ... not unanswered, but simply ignored... and that the next books will bring more wonder, more magic, more characters, all dancing around this huge singleton of a main character which is the universe of the Malazan Empire. It's refreshing, it's great... it's annoying!! :)