A new (and old) buzzword: to reinvent. It is always a good thing to reinvent yourself, they say, with the effect of relieving boredom and living a "new" life. You may discard bad or useless things in favor of good things. It is also good to reinvent something somebody else did, like a movie. You take the idea, you remove the bad things, you add good things. But, as in the case of the benevolent tyrant, the definition of good and bad is always fuzzy.

Because, you see, the people that decide what is good and bad in movies are actually the money people. They look at superficial statistics that only show... money! They make abhorent remakes of decent films (like Indiana Jones 4 - The Rape of Indiana) or they turn every hero into man/woman/teenager/animated-character/doll versions that bring nothing new. 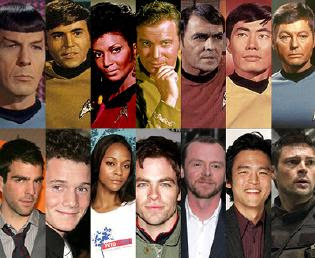 In the case of Star Trek, they made the first low budget series than achieved cult level regardless of bad production values and some ridiculous scripts, then they made a sequel (at that time reinvention was not invented yet) where Patrick Stewart redefined the space captain as a cerebral science oriented man, but with lots of guts, then they started the old routine: make the captain black, make him a woman, replace the ship with a station, then with another ship, but in some other place, etc. They even made a prequel, which, for almost a full season, was decent in both interpretation and scenarios. What was missing, of course, was a teenage Star Trek captain. Well, no more!

"Star Trek", the 2009 movie in the making (and no doubt, with a series looming if money are made), features a young Kirk and (what a fallacy) a young Spock! The director is none other than my least favourite person in the world: J.J.Abrams, the maker of such abismal stupidities (but well received by the general audience) like Alias, Lost and Fringe. The writers are Abramses old team, Roberto Orci and Alex Kurtzman, the brilliant creators of such idiocies like Alias, Fringe and Xena/Hercules!

I am trying to keep an open mind here, but I would venture to guess that the new Star Trek will have big booming sounds whenever something strange happends, will be filled with inexplicable things that will never be explained, except maybe in the movie (but I doubt it, they have to plant the hook for a series) and will have people calling the others by name obsessively, regardless if the need for it arises. So, it may be cool, but I expect to be baktag!