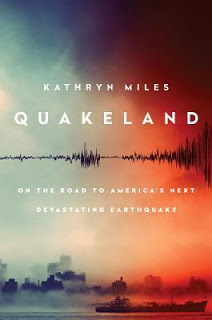 We trust the ground beneath our feet as something solid that can take our weight, keep our structures straight, holds fast. Yes, we read things, we know about tectonics, but other than that, everything is stable. In the very beginning of Quakeland, Kathryn Miles thoroughly debunks that idea: Earth is an ocean of lava upon which very thin amalgamations of sand and rubble float precariously. What we call faults are just the largest of cracks, stable and classifiable; there are many more that we have no idea exist, fragile enough to be affected or even created by human activity. At this point, I was expecting an exciting journey through the center of the Earth. If the book would have continued as it started, it would have been a solid five stars, an educational tool to teach what most of the people have no idea about: the fragility of the thin crust we call solid ground. Alas, it was not to be.

The rest of Quakeland, let's say the last 80%, was a very US-centric analysis of how neglected earthquakes are when constructing and maintaining American infrastructure and a fear inducing series of "what-ifs" and possible disasters affecting that one country. I shouldn't have expected anything else, I mean the subtitle is pretty clear, but how can someone switch registers from talking about the very structure of the planet to the measly issues of one country and its weird measuring units? And maybe she did not use the almost ubiquitous bus size, but Miles did use the swimming pool together with the M-scale (do not let any "serious" seismologist hear you talk about Richter), the miles, the feet, the pounds, etc. The writing is competent and almost formulaic in structure, but I can't say I had any issues with it.

The bottom line is that the beginning was brilliant, the information that fracking (and mining in general) - regardless if it is toxic, damages the ground water or anything else activists throw at it - causes long series of earthquakes that affect whole areas while and even after operations cease, as powerful political and economic forces deny and actively fight the science that demonstrates this was new and important. Yet other than that it was just a normal reporter speculating about the possibilities of quakes - man made or not - causing serious harm. A lot of terribilism and fear mongering. That is why I can't really recommend this book and I will rate it as average only.